Posted on February 24, 2018 by thewineraconteur

I am going to discuss two more wines that I tried at The Fine Wine Source in Livonia, Michigan.  I say “tricky rules,” because it sounds like the two wines should be on either side of the river in Bordeaux, but both wineries are in the Saint-Emilion district, but they each carry a different designation for the wine on their label. 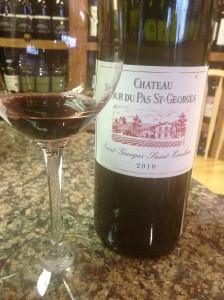 The first wine is Chateau Tour du Pas Saint-Georges-Saint-Emilion 2010.  Here is a wine that is sixty percent Merlot, thirty-five percent Cabernet Franc and five percent Cabernet Sauvignon.  This wine was aged for fifteen months in French Oak, of which thirty percent was new.  I found this wine to have a nice color, with a lot of spice and a fine finish.  I have always had a certain fondness for wines from Saint-Emilion, and this wine carries the Saint-Georges addition, which is the smallest sub-district of the area and according to the rules, it could either use Saint-Georges-Saint-Emilion or Montagne-Saint-Emilion, which I just find curious. 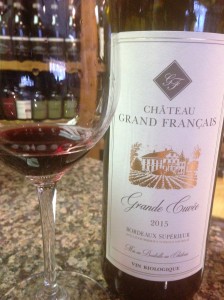 The other wine that I tasted immediately after is from a winery also situated in Saint-Emilion.  The Chateau Grand Francais Grand Cuvee Bordeaux Supereiur 2015.  This a third generation, eight-hectare estate that is organic.  The wine is fifty percent Merlot, thirty percent Cabernet Sauvignon and twenty percent Cabernet Franc and all the vines average about forty years.  The wines were aged from ten to fourteen months in new and older French Oak barrels.  This wine had good color, an excellent nose and a nice finish for a new wine that was poured directly from the bottle using the Coravin system, and I think this wine will be very nice in about five to ten years.  I am not that knowledgeable to state why each of these wines took the designations that they did, and perhaps someone smarter and more versed in the wine laws can enlighten me.