Dinner in a Wine Cellar

Posted on October 8, 2018 by thewineraconteur

Do you know how dangerous it is for the two of us to go strolling in Petoskey?  Petoskey is the perfect example of a resort town.  The shops were not cookie cutter and yet somehow my Bride knew about all of them, I don’t know, maybe it is osmosis.  She found some clothes, some Christmas presents (which for her is a year long occupation) and some kitchen ware.  She saw some kitchen stuff from MacKenzie-Childs and she became this woman possessed.  I had never heard of the line, but she informed me that one of my cousins, swears by this company, so now I guess, so do we (I must make a memo to myself to disown that cousin).  When we first got to Petoskey we found this charming shop called Symons General Store which opened up in 1956 in the oldest brick building in the city and it was nirvana.  We always like to have some noshes in our hotel room, and Symons did it up properly with some pate, and some exquisite onion crackers.  There was nothing proletarian about this shop or the products that they proffered.  They also had a very interesting wine selection, very well thought out and some very unique wines; not to mention that there was a shelf that ran the circumference of the shop just below the tin-stamped ceiling that had hundred of “dead soldier” bottles of wine, like First Growths and DRC.  I was kind of pushed to another section of the shop and away from the wines (go figure). 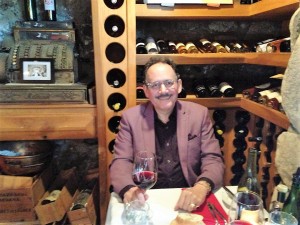 When we are out on holidays, it normally is my job to find some place interesting to dine at.  So, in the morning while my Bride was working at the board meeting that brought us to Petoskey, I had my morning constitutional and walked some forty or fifty blocks looking at the different restaurants that had been touted to us.  I know that I could probably do it on line, but ever since Google has become just one big commercial site, it is very difficult I find to navigate the maze of red herrings.  I thought I had found our restaurant, but the menu was not that exciting, and I do appreciate when menus are posted for the casual stroller to read.  After her work was done and we were walking around we found Chandler’s which had opened in 1999 and in the early autumn season, they were offering three venues for dining; the main dining room and bar, the patio and the wine cellar.  It did not take long to figure where we were going to dine.  It turns out that Chandler is the son of the man that started Symons and the cellar was underneath the general store.  The cellar was quite spacious and had wooden racks everywhere, but I am sure that there was some secret to the numbering and placement of the wines.   We had been noshing the whole day, so when we sat down for dinner, we were just ready for our entrée dishes.  My Bride had the Roasted Amish Chicken Breast with Angel hair pasta, roasted local tomatoes, marinated olives, basil and Fontina Fondue.  I had the Maple Leaf Farms Duck Breast with a roasted Michigan peach, Baby Bok Choy, Shiitake mushrooms, preserved Ginger and a Chinese Black Bean-Garlic Sauce.

The wine carte was very impressive both in size and scope, it took a bit of time to ponder all of the selections.  There was also an exquisite caveat in various places in the wine carte next to some very famous wines and here is one quote “the following wines from Chateau D’Yquem have all been in our possession since their original release.  They have been properly stored & are sold as is.”  I know that some have already decided that I was going to order a bottle of Pinot Noir of some sort, because I was having duck, but instead we had a bottle of Paul Mathew Vineyards Cabernet Franc Alegria Vineyard 2015.  This wine was from the Russian River Valley in Sonoma County.  Alegria Vineyard is a five-acre block planted in 1991.  The wine is fermented in Stainless Steel and bottled in early spring after the harvest.  The wine delivered the fruit and it was still very fresh and youthful and by the end of the meal it had opened up and was a well appreciated bottle of Cabernet Franc, in fact it was so delicious I only had the empty bottle to take back to our room.  During our meal I had a chance to talk to the wine steward/waiter and we were naturally talking about wines.  When he learned where we live, he asked me if I knew a certain gentleman and I had to say yes, the gentleman in question is the owner of Fine Wine Source in Livonia which is where I have a membership in his wine club.  After dinner and a dessert of Crème Brulee we had a glass of Chateau d’Orignac Pineau des Charentes.  This a fortified wine that is made from sixty percent Merlot and the balance is Cabernet Sauvignon.  The current “must” of this wine is blended with a cognac made from the prior year, which is a blend of Ugni Blanc and Colombard.  Then the blended mixture is aged for five years in French Oak.  It was a delightful second night in Petoskey. 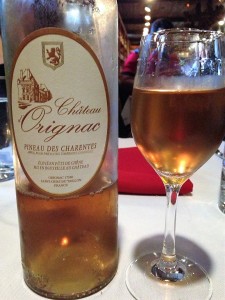 2 Responses to Dinner in a Wine Cellar