Posted on October 6, 2018 by thewineraconteur

Our first afternoon up in Petoskey and we had some free time, prior to dinner that evening, so we went into the downtown, which was all of a block and a half from the Stafford’s Perry Hotel.  The downtown area is what one should expect from a resort town.  There was some very fine shopping and only a couple of chain operations, some nice art and plenty of gift shops.  They also had two fine men’s stores which made me smile, so often a men’s clothing store is some t-shirts, but the two stores actually had merchandise that I would purchase.  Also, in the downtown area was a tasting room for Mackinaw Trail Winery of Petoskey, they actually have four tasting rooms in the state. 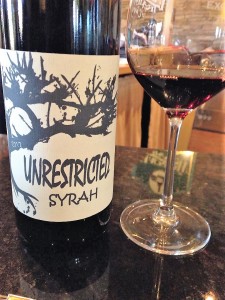 Mackinaw Trail was founded in 2004 and they have their second generation already working as a winemaker.  The winery owns thirty acres, but currently grow on fifteen acres.  Some of the wines that they produce come from the Lake Michigan Shore AVA, which produces about ninety percent of the wine for Michigan.  The AVA runs along the eastern coast of Lake Michigan from the Indiana border up to the Kalamazoo River, and runs about forty-five wide from the shore line.  The AVA supplies enough juice for about fifty different wineries in the state and the area is also a large producer of the Concord and Niagara grapes that are used for table juice and jams and jellies.  The cream of the crop is the wineries Unrestricted line of wines, where more attention and artistry are devoted.  While we were in the tasting room we tried five of the wines that were being offered.

The first wine that we tried was the Unrestricted Barrel Reserve Chardonnay 2015.  This wine was produced using the Sur-lie method and was aged for ten months in Russian Oak.  The wine was served slightly chilled, more at cellar temperature for the nose to express itself.  I found this wine to have some natural sweetness and I can think of many relatives that this wine would appeal to.  The Unrestricted As-cen-sion 2017 was an interesting little blend of thirty-four percent Sauvignon Blanc, twenty-five percent Chardonnay, twenty-two percent Riesling and nineteen percent Pinot Blanc.  This had a sweeter nose and was a nice balanced wine and once again would be very popular among some of the females that come over here for occasions.  The Unrestricted Cuvee No. 7 2015 was a very interesting red wine, a blend of fifty-two percent Cabernet Sauvignon, twenty-eight percent Cabernet Franc and twenty percent Merlot.  This wine was aged for twenty-six months in French and Hungarian Oak and was an easy drinking red wine that had a nice tannic background that worked very well.  The Unrestricted Barrel Reserve Cabernet Sauvignon 2013 was a winner and only six barrels made the cut, for the aging period of thirty-two months in both French and Hungarian Oak.  A very nice Cabernet Sauvignon for Michigan, if I may say so.  The Unrestricted Syrah 2012 was a stellar wine from the Lake Michigan Shore AVA and I think it was the first Michigan wine that I had that retailed for a hundred dollars.  This wine had an extended maceration period and then was aged for twenty-four months in French and Hungarian Oak.  A good solid nose with vanilla and spices abounding with a nice long aftertaste.  A well-balanced wine that I think could easily age for another six to ten years, as it was that impressive young.  After the tasting allotment, our hostess in the tasting room wanted us to try another wine, as I guess she thought I must have been some crazy guy for taking all of these notes and making sure that every wine was photographed.  I mean who does that, but some over the edge wine bloggers.  She poured us the Tip of the Mitt Estate Grown Petite Pearl 2016.  There was not a lot of information to be gleaned about this wine, but this grape is a Cold Hardy variety where the grapes are very small.  This wine was dry and rather full-bodied with flavors of red fruit like cherries and currants.  Not to mention another grape for me, just in case I ever decide to sit down and apply for the Century Club, and one never knows.