Posted on August 17, 2018 by thewineraconteur

We took a little side trip while we were up at Crystal Mountain and went to Glen Arbor, Michigan.  The Glen Lake area is the home to the Sleeping Bear Dunes National Lakeshore and before you ask, we did not do the dunes.  We are not the most “touristy” type of people, we go somewhere, but we tend to walk, shop eat and drink.  Glen Arbor was bustling with tourism, one of the hardest things was to find a parking space.  It was a very quaint eight or ten block area with shops and galleries and I was surprised to see, the walking zombies that have more interest on their phone, than the surrounding sights that they drove out to see, as they walked into traffic situations totally oblivious to the three-thousand pound automobiles that they just ignored, not to mention the people that they would bump into on the sidewalks, because their indifference to their surroundings were only the concern of others. 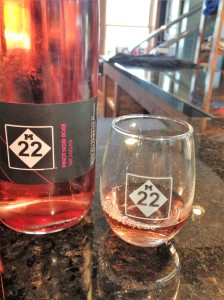 We discovered a shop called Crystal River Outfitters that had casual clothing, rentals of kayaks and bicycles and an outdoor and an indoor wine tasting room for M22 Wines.  I never heard of M22 Wines and the odds are that you hadn’t either, but the main road in Glen Arbor was M22.  We were there, so we were game, as one never knows that one may discover a great find.  The tasting room charged you six dollars for five tastings and if you desired extra tastings they were an extra dollar per tasting, and one left with the glass if they so desired.  The would also pour one large pour at different prices for different wines while you were in the tasting areas.  The wines were all made for the M22 location by Black Star Farms and Black Star Farms began in 1998 in Suttons Bay in the Leelanau Peninsula.  The first person behind the counter when we started the tasting found someone else to help us, as she wasn’t sure how to answer my basic questions about the wines.

We started off with the M22 Late Harvest Riesling NV, as that is a popular varietal for the whole Northwestern corner of Michigan.  I might add that all of the wines were NV or “non-vintage” and I didn’t see any AVA on the labels, but I will presume that they were Michigan wines and grapes.  The Late Harvest Riesling was not a sweet as I was anticipating.  The next wine was M22 Chardonnay NV, which was stressed that it was pure Chardonnay and our host made it sound like the wine was made “Sur-Lie,” but no other information was forthcoming and it did taste like a Chardonnay.  The third wine was M22 Pinot Noir Rosé NV and this wine had a pretty color, a soft nose and short aftertaste.  We then tried the M22 Overlook Red NV which was a blend of Dornfelder and Marechal Foch, two distinct Cold-Hardy grapes which were very popular in the early days of winemaking in Michigan.  This wine was a sweeter red, but thankfully it did not have that foxy taste that some of those grapes can offer.  The fifth wine of the tasting was M22 Red NV which was a blend of Cabernet Franc, Merlot, Pinot Noir and Syrah.  With all of the grapes that I enjoy this wine was pleasant, but not worth taking a bottle home.  We splurged and had a sixth tasting and tried the M22 Vintners Red NV which was a blend of Cabernet Franc and Merlot.  Once again pleasant, but it did not give me or my Bride that Cabernet Franc taste that we were looking for.  There were another seven wines that we did not try, and while we have enjoyed Black Star Farms we left only with the tasting glass and not a bottle.

A non-technical wine writer, who enjoys the moment with the wine, as much as the wine. Twitter.com/WineRaconteur Instagram/thewineraconteur Facebook/ The Wine Raconteur
View all posts by thewineraconteur →
This entry was posted in Wine and tagged Black Star Farms, Cabernet Franc, Chardonnay, Dornfelder, M22 Wine, Marechal Foch, Merlot, Michigan, Pinot Noir, Riesling, Rose of Pinot Noir, Syrah. Bookmark the permalink.