Posted on August 19, 2018 by thewineraconteur

All the time that we were up at Crystal Mountain, there was a bit of The Thin Man that permeated the trip.  No there was no mystery and thankfully no murder, but the ambience in the vacation home was one of a good time and a constant flow of the nectar of the Gods.  There was an endless supply of food and that is a good thing, because the young ones ate on a different time zone compared to us, and they could not seem to enjoy what we were all preparing and enjoying.   Definitely different to the environment that I grew up in.  Some of it was because of the in and out adventures of all the things that could be done at the resort, so I guess I can excuse some, but not some of the diets.  While there were some excellent wines to be had while we were up there, some of the wines were just there to quench the thirst because of the heat and after long walks in the area.   We did go through an abundance of white wines. 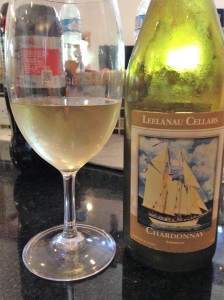 One of the wines that we had was in keeping with the area, the wine country of Michigan.  We had a bottle of Leelanau Cellars Tall Ship Collection Chardonnay NV with an American AVA, so the winery was Michigan, but the grapes were not.  Leelanau Cellars is one of the oldest wineries in the area and it had begun as a cherry orchard in the 1960’s.  In 1974 they first uprooted some of the orchard and planted some grapes and in 1977 they released their first commercial wine.  The winery itself has eighty-nine acres and they grow classic international vitis-vinifera, non-vitis-vinifera and hybrid grapes as well.  They produce around two-hundred-fifty-thousand cases a year and they basically only sell in Michigan and a few of the adjoining states in the Mid-west.  There was not much information to be gleaned about this wine, but Leelanau Cellars refer to this wine as “off-dry” and I guess that is as good as a descriptor as there could be.  I mean it was just a refreshing chilled white wine that was working with the cheeses and most of the other noshes that were constantly being pulled out of the refrigerator.

Another of the white wines that was being quaffed down was one that is better known, but still the winery is rather close-fisted about their proprietary production.  The Sterling Vineyards Vintner’s Collection Central Coast Chardonnay 2016 was doing an admirable job.  Sterling Vineyards was founded in 1964 with fifty acres in Napa Valley near Calistoga.  One of the side notes of fame for Sterling Vineyards is that they were the first to issue a vintage dated Merlot in their inaugural 1969 production, which also featured Cabernet Sauvignon and a Sauvignon Blanc.  In 1977 the winery was sold to Coca Cola Company during their period of being in the wine industry, it was then sold in 1982 to Seagram and then by Diageo in 2001.  One of the fun things is that there is a tram at Sterling Vineyards that one can ride, similar to the ski-lift at Crystal Mountain, and when my Bride and I were at Sterling years ago, we use up a whole panoramic disposable camera while on the tram, alas the camera was defective we learned when we arrived back from that trip, so we have no photos from Sterling.

A non-technical wine writer, who enjoys the moment with the wine, as much as the wine. Twitter.com/WineRaconteur Instagram/thewineraconteur Facebook/ The Wine Raconteur
View all posts by thewineraconteur →
This entry was posted in Wine and tagged American, California, Central Coast, Chardonnay, Leelanau Cellars, Michigan, Sterling Vintner's Collection, Tall Ship Collection. Bookmark the permalink.