An Afternoon in Vegas

Posted on March 10, 2018 by thewineraconteur

If one has never been to Las Vegas the bright lights are almost a Siren call for all of the glitter that is there.  Alas, for me that Siren has long been silenced from all of the years of going there, I now have other Muses that tend to entice me, as I discovered decades ago that I am not a gambler and thankfully that was not an expensive lesson.  So, what does one do in Las Vegas, especially when the internal clock is still set for three hours earlier?  We shop and sometimes if the Gods smile upon us, it is some great power shopping.  This was not the case, but it was worth a gamble, especially to keep us away from the tables.  While my Bride has an extensive wardrobe, I have to admit that I am no slouch in that department, though I am constantly reminded that my shopping is far dearer than hers.  We both enjoy buying shoes, but I wear such a unique size, it is amazing that I have as many shoes as I do, we both fall far behind Mrs. Marcos, but we do strive for that goal. 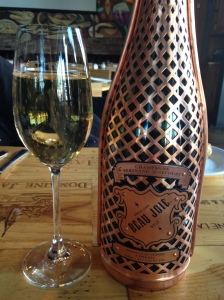 After a lackluster attempt at shopping, we did work up an appetite, so we decided to get a quick light meal, because we were going to have dinner with everyone later that evening.  I prefer independent restaurants for the most part and we ended up going to an eatery that we have enjoyed in the past.  We went to Grape Street which is located in Downtown Summerlin, which in itself is unusual, because Summerlin is a planned community that was designed and platted on paper, before the first shovel was inserted into the dessert ground.   The allure of Grape Street is that not only do they have good food, they are also a wine shop and bar which for us is an oasis in the dessert.  Even the tables that one dines on, are reclaimed wine crates with such heady names at DRC and Opus One, just to make us feel comfortable.  All we did is share a couple of appetizers to hold us over until our dinner.  We shared an order of Baked Brie in a puff pastry shell with toasted Hazelnuts, caramelized onions and an apricot preserve.  The other plate that we shared was Crab Stuffed Shrimp with a Scampi Sauce and some sides of charcuterie and cheese.  Our hunger was satisfied without being over sated.

Somehow it just wouldn’t have felt right to be dining at Grape Street and not to have wine, after all that is what I tend to write about eventually in all of my ramblings.  My Bride had some Schramsberg Mirabelle Brut Rosé North Coast AVA NV.   The juice for this wine came from Carneros, Anderson Valley, Sonoma Coast and Marin County.  The juice was a blend of sixty-four percent Pinot Noir and the balance was Chardonnay.  The juice was aged in a mixture of barrels and tanks for a year, blended then in the bottle for another two years to totally finish the wine in the traditional method.  I enjoyed a glass of Beau Joie Champagne Brut NV from Bertrand Senecourt in Epernay, France.  This wine was a blend of sixty percent Pinot Noir and the balance was Chardonnay.  This wine was aged for four years on the lees and then spent another two years in the bottle.  The name of the wine translates to “beautiful joy” if my French is up to par, and the bottle is encased in a unique recycled copper mail wrapper, which can be recycled afterwards, and the purpose is that it will keep the bottle chilled for a couple of hours after opening without the necessity of having an ice bucket, depending on the ambient temperature of the room.  I have to admit that both of the wines were excellent in delivering what a good sparkling wine should, but we were unanimous in our thoughts that the Beau Joie was the tastier and more interesting of the two.

2 Responses to An Afternoon in Vegas