The First Night with Everyone

Posted on March 12, 2018 by thewineraconteur

Here we were in Las Vegas and trying to find someplace that everyone would enjoy.  With the grandchildren getting older, there are all acquiring likes and dislikes about food, a rather common occurrence and one they could probably blame on their grandfather, the King of fussy eaters.  We ended up having dinner at Capo’s Restaurant & Speakeasy again which is in Las Vegas, but not on The Strip.  We had to enter through the classic speakeasy entrance, but now it seems that the world has discovered this fun little place and from what I hear, reservations are the norm, but when you are having ten for dinner, reservations are always the best idea.  The room still has the semi-lit ambience and live entertainment that one would expect from a speakeasy environment.  In fact, the hardest part was finding someplace for a group photo that my Bride took. 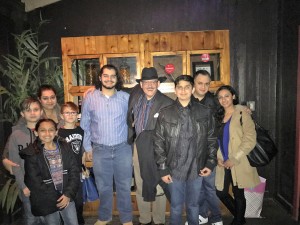 There is so much food that they serve with the entrees that it really wasn’t necessary to start with any appetizers.  Some started with the soup, but most were like me and had the house dressing of Creamy Garlic, which is very nostalgic and keeping with the theme of the restaurant.   Some of the dishes had quaint names like “Chef Sleeps with the Fishes,” “Dinner Tony Duck” and “Racketeer’s Ravioli.”  As you can see they play off of The Godfather, The Sopranos and the Kefauver Trials for the names of the entrees.  The fancy names were for classic interpretations of Italian dishes that one would expect to get, going out for dinner, with the added plus of a lounge singer in the background, truly a nice touch and something one doesn’t often encounter any more.

We started off with Famiglia Pasqua Passi Mento Bianco Veneto IGT 2016.  The Easter (Pasqua) Vineyards and Cellars began in 1925, in the famed Veneto district near Verona.  The name of the wine is a shortened version of “Passione e Sentimento” and is also known as “Romeo and Juliet” and that is about as passionate and sentimental as one can get.  The name of the wine is actually printed over a photograph of a portion of the messages left on the walls of Juliet’s house.  The wine is made from the Garganega grape, hence the Veneto IGT designation.  The grapes are left to dry in trays to concentrate the sugar and then macerated for twelve hours in Stainless Steel.  Part of this juice is then transferred to wooden barrels for a couple of months and then is blended with the balance from the Stainless-Steel tanks.  The lighting doesn’t allow the yellow straw color to be appreciated, but it was a very enjoyable wine to begin the evening.  The second wine of the evening was one that we have enjoyed each time we have been there, just three different subsequent vintages.  We were enjoying Allegrini Palazzo Della Torre Veronese IGT 2013, that they were listing as a “Baby Amarone.” The Allegrini family has been making wine since about the Sixteenth Century and they only bottle estate grown wines. This wine carries the Veronese IGT because it is a blend of Corvina, Rondinella and Sangiovese, otherwise it would have been a Valpolicella if instead of Sangiovese they had used Molinara. The reason that this wine is referred to as a “Baby Amarone” is from the fact that it is produced using the Ripasso Method with whole partially sun-dried grapes. Even in the dimly lit room I could tell that the wine was a deep color and with way then enough character to stand up to the rich Italian dishes.  A wonderful way to spend an evening with the family.