Posted on August 6, 2017 by thewineraconteur

Belissima is Italian for “beautiful woman” and it is a line of three sparkling wines from Italy and Christie Brinkley. The Christie Brinkley who smiled at us, from my era, on the cover of over five-hundred magazine covers. Another celebrity that is making wine and I had the pleasure of trying two of the three wines the other night at D. vine wines, a wine shop near me, that has wine classes on Tuesday night, so on occasion I go and try some new wines. Though Christie is not featured on the wine labels, another beauty is and that is a version of Sandro Botticelli’s “Birth of Venus,” but in small print if one gets past Venus, one can read “Con Amore, Christie Brinkley” which would translate as “With Love, Christie Brinkley.” 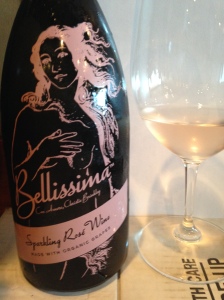 The first wine that we tasted was Bellissima Sparkling Rosé Wine NV and it also proclaims as all of the wines do that it is made with organic grapes. The wine’s fruit comes from the Treviso-Veneto region of Italy and since the wine does not say Prosecco, the fruit is labeled as Glera. This wine had a pretty pink foam as it was being poured into the wine glass, but there was not a lot of bubbles emanating from the bottom of the glass. The wine spent forty-five days in secondary fermentation in an autoclave, which must be another style of producing the Charmat Method of sparkling wines. 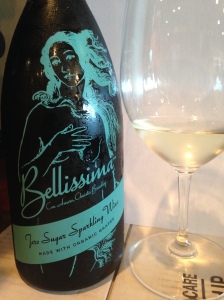 The second bottle was Bellissima Zero Sugar Sparkling Wine NV also from the same region of Treviso-Veneto and it is also pure Glera. This wine also had very little in the way of bubbles and was a pale straw color. This wine spent its secondary fermentation of seven months in the autoclave. Of the two wines, I found the Rosé to have a better nose and a much smoother taste and finish, as the Zero Sugar was bone-dry and not appealing to me. The third wine that Ms. Brinkley produces is a Prosecco, which we did not try.

A non-technical wine writer, who enjoys the moment with the wine, as much as the wine. Twitter.com/WineRaconteur Instagram/thewineraconteur Facebook/ The Wine Raconteur
View all posts by thewineraconteur →
This entry was posted in Wine and tagged Bellissima, Glera, Italy, Sparkling Rose, Treviso-Veneto, Zero Sugar Sparkling. Bookmark the permalink.