“You Make Me Feel So Young”

Posted on February 25, 2017 by thewineraconteur

“Leave the gun. Take the cannoli.” Is one of the most famous lines ever uttered by a Mafia Caporegime in cinema history. That line of dialogue brought uneasy laughter after watching a gangland killing in a Cadillac. How can one not think of that line going to an Italian restaurant in Las Vegas called Capo’s Restaurant & Speakeasy? We had been there before, but my children and grandchildren wanted to go there again. From the moment, you walk into the restaurant foyer and it is a closed room with an old-fashioned pay-phone on the wall; all of a sudden, a small trapdoor opens and they ask you if you have a reservation. The part of the wall with the telephone on it all of sudden swings open, and you are led into a stylized nightclub of old school charm. They led us to our table of ten and the few times the grandchildren even got a bit fidgety is when they took turns going up to the lounge singer asking for requests. They have to be mine, all of the songs that they requested were hits by Frank Sinatra, Tony Bennett and Dean Martin, he even sang the song that was our wedding song “You Make Me Feel So Young.” In fact, the only song that was not in his repertoire that my Granddaughter asked for was “The Theme from Love Story.” The singer was not performing when we were escorted to our table and I had my back to band, and when he started his show, I thought I was listening to recordings, he was that wonderful. 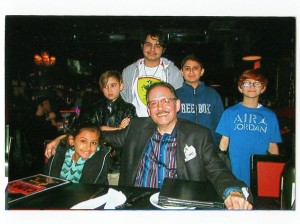 We were seated right next to the Chairman of the Board table, which featured a large famous mug-shot of Francis Albert, other framed photos featured legendary real criminals and cinematic criminals. The room itself had an ambience, because the lighting was so dim, the menus had an attached flashlight so that you could read it. The menu read like a classic Italian menu, but updated with a wink and a nod to the “gangsters” both real and fictional. The food was coming out in waves and even the grandchildren were troupers and when all of the assorted steaks and entrées arrived the whole table was hushed for a change as everyone was enjoying the dinners. In fact, one couple that were in a booth behind my Bride as they were leaving, stopped to compliment her, on how well her grandchildren behaved in public. I guess there is no denying that we must look the part of grandparents. 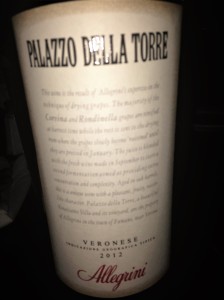 Once again, it was only my Bride and I, among a table of heathens, as we were the only ones to have wine with dinner, cocktails and beer (including root beer) were the odds-on favorites for beverages that evening. I thought that we had the best of the affordable wines on the wine carte and it was the same wine that I had the last time, just a different vintage. We were enjoying Allegrini Palazzo Della Torre Veronese IGT 2012, that they were listing as a “Baby Amarone.” The Allegrini family has been making wine since about the Sixteenth Century and they only bottle estate grown wines. This wine carries the Veronese IGT because it is a blend of Corvina, Rondinella and Sangiovese, otherwise it would have been a Valpolicella if instead of Sangiovese they had used Molinara. The reason that this wine is referred to as a “Baby Amarone” is from the fact that it is produced using the Ripasso Method with whole partially sun-dried grapes. Even in the dimly lit room I could tell that the wine was a deep color and with way then enough character to stand up to the rich Italian dishes, even the Creamy Garlic Salad Dressing was put in its place. This was a bittersweet night, as it was the last night that we would all be together for some time. As I was leaving in a rather sadly, until the next time, all I could think of was the line from the other ill-fated Caporegime “Tell Mike it was only business. I always like him.”

A non-technical wine writer, who enjoys the moment with the wine, as much as the wine. Twitter.com/WineRaconteur Instagram/thewineraconteur Facebook/ The Wine Raconteur
View all posts by thewineraconteur →
This entry was posted in Dining, Wine and tagged Corvina, F.LLI Allegrini, Italy, Palazzo Della Torre, Ripasso, Rondinella, Sangiovese, Veronese IGT. Bookmark the permalink.

3 Responses to “You Make Me Feel So Young”