Posted on February 5, 2017 by thewineraconteur

A short six and a half miles from Sanders Family Winery and there was Pahrump Valley Winery and in one morning I had the chance to visit fifty percent of the wineries in Nevada. What a difference that six-mile drive was for the attitude of the person behind the tasting counter. While the first was gregarious, the second winery was in the midst of ennui, it felt. The winery had a huge room displaying all of the awards with a bottle of each wine with the awards. Pahrump Valley Winery produces about ten-thousand cases of wine per year and most of the wine is sold within the state on Nevada. The winery had three brands featured. The first brand was Pahrump Valley Winery for “fun, fruity, friendly” wines and there were four different labels. Their Charleston Peak line were touted as “carefully crafted classic” wines and they offered twelve different wines for tasting. The first two brands either carried California or American appellations. The last brand that they offered was Nevada Ridge which the claim of “making history” and all seven wines had a Nevada appellation.

We were each offered seven tastings each, but we ended up only trying nine different wines. My Bride wanted to taste two of the Charleston Peak wines and I wanted to try all seven of the Nevada Ridge wines. My Bride tried the Charleston Peak Pinot Grigio 2015 with a California appellation and it was a soft Pinot Grigio. The other wine that she wanted to try, as she is always looking for wines to give as gifts to her friends that are really not wine drinkers and the wine she chose was Charleston Peak Sweet Melody NV a blend of a red wine and dark chocolate; very similar to wines of this ilk that we have tried at other wineries. 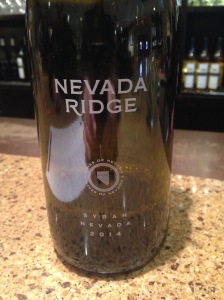 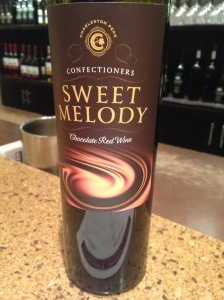