Posted on February 3, 2017 by thewineraconteur

The last time I was in Las Vegas, I tried to get some Nevada wine to try with no success and I thought it would be interesting to try some wine from this state. So, before I left for Las Vegas, I did some research and found that there were two wineries about an hour away from where I would be staying, so off for an adventure.

Sanders Family Winery is the first modern winery in Nevada not far from the California border and in full view of the mountains. We actually got to the winery before anyone else and then we were greeted by the owner Jack Sanders. When we started talking, it turns out that he actually lived about a mile from our house, so he is an old Michigander and in a prior life he was in the local television media of Detroit and he discussed past events and local luminaries of that time. He said that there are four wineries in Nevada, two in Pahrump where he is and two near Reno, Nevada. He said that there is a movement to get Nevada some appellations and that at the moment the winery carries an American NV listing. The winery at the moment grows Petite Sirah and Zinfandel and purchases other fruit from California. The winery was established in 1988.

There were three white wines that we tried. Sanders Chardonnay NV was a pleasant and crisp Chardonnay that was aged in Stainless Steel and Polyethylene vats. The fruit for this wine was from Santa Ynez and Santa Barbara in California. The second white wine was Serenity NV and is a blend of Symphony (a cross between Alexander Muscat and Grenache developed by UC-Davis) and Riesling and French Colombard from Monterey County. This was an easy drinking wine with some sweetness, but not cloying. The last wine was a Rosé called Harmony NV, which was his “Proprietary Blend” which Jack said meant at most places meant a way to get more money as he said with a twinkle in his eye. Harmony NV was a blend of his Estate Zinfandel and Santa Barbara Pinot Noir and it was another very easy drinking wine. 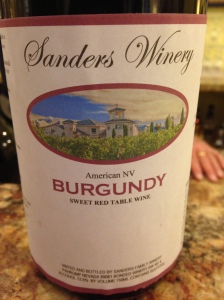 There were three red wine plus a dessert wine made at Sanders Family Winery. The Sanders Merlot NV was made from fruit harvested in Lodi, California and was aged for ninety days in lightly toasted oak barrels and it was very easy and a light red wine. The Cabernet Sauvignon NV also had fruit that was harvested in Lodi and aged in Stainless Steel and it had a spicy taste to it. The last red wine was Burgundy NV for those who don’t like red wine as Jack said. He said that he called the wine Burgundy for the color and not to evoke the area in France. The wine was a blend of sixty percent of the Estate Petite Sirah and the other forty percent was a blend of Cabernet Sauvignon and Cabernet Franc. While the label was not enticing as it evoked memories of the old jug wines that said Burgundy from when I was a kid, the wine was very pleasant and easy to drink. 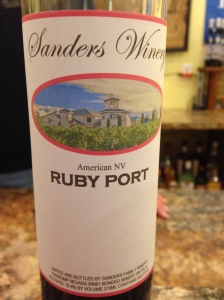 The dessert wine that Sanders makes is his Ruby Port NV and is made from the Estate Petite Sirah and fortified with Grappa, also made from his Petite Sirah. This was very enjoyable and was very enjoyable even that early in the morning, of course we were still on Michigan time, so it made it easier to taste the wines. After we had the Sanders Ruby Port NV, Jack then poured some more of the wine in the glass added some Ginger Ale, ice and a wedge of lime and made us a wonderful glass of this Ruby Red Slipper, this wine really won over my Bride.

This Raconteur may have met his match as we regaled ourselves with different tales and the wine tasting lasted about an hour and a half. Jack Sanders also had a special wooden three pack case from his original products. The three-pack showed his earlier venture with the winery that he sold, before he opened this one and there was Pahrump Valley Vineyards Dessert Blush, Charleston Peak White and Sunset Rose. While my Bride was not keen originally on this day trip, she was totally won over by the time the tasting finished and we bought some of his wines. As we were getting ready to leave, he mentioned what Pahrump was famed for and it was not the wines, and he gave us directions if we wanted to take pictures of the infamous Chicken Ranch the legal brothel of Nye County of Nevada. We skipped the photo op, but left with Sanders Chardonnay, Serenity and Ruby Port.  So if you are in the Las Vegas area, I would strongly suggest visiting Jack at his winery, you will be glad that you did.