Posted on April 29, 2016 by thewineraconteur

Detroit is one of the oldest cities in the nation and it is surrounded by the suburbs and the Detroit River. If you follow the River in a south-western direction you will leave Detroit and venture into an area that is known as Downriver. Detroit was founded in 1701 and as you go Downriver, the city that is known as the Heart of Downriver is Wyandotte and it was founded as a village in 1854. Downtown Wyandotte is very quaint and most of the buildings there have the facades that were current when the business began there. It has evolved like most cities from a majority of retailing to a mix of restaurants, taverns, financial offices and still some retailing. The city has the cachet of being “hip” and it is curious in the fact that one can find taverns mixed in the residential areas as well. 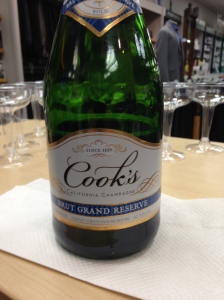 I mention all of this because the Business Association has created an event that is held once every month called “Third Fridays” and is a way to generate extra interest in the Downtown area. Each “Third Friday” has a different theme and it has quite the following, not only for the locals, but also for the people in the neighboring communities. All this exposition is finally getting to wine, in my typical rambling way. There are “Beer Crawls” and “Wine Nights” and the last one was “Ladies Night” and for each of these, most of the businesses have tables set up with beverages that they pass along to the visitors for the events, according to the rules set up by the host committees. 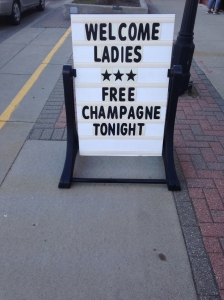 The Men’s Clothing store on the main drag had a sidewalk sign that proclaimed “Welcome Ladies ***Free Champagne Tonight.” A very gallant gesture and there were plenty of people that took advantage of the evening. The businesses use “Third Fridays” as a way to introduce themselves to the public in an open way, so that people can see what is found inside the doors that they may just walk past. The beverage that was being doled out was Cook’s California Champagne Brut Grand Reserve NV. Cook’s bills them as “#1 Sparkling Wine in the U.S.” The three basic grapes in a Champagne blend are Pinot Noir, Chardonnay and Pinot Meunier. I am sure that since Cook’s was founded in 1859, they are grandfathered in and are allowed to call themselves California Champagne, since the name Champagne is now protected. This wine has the secondary fermentation before bottling, which are the bulk method and not the Traditional Method. It is a good wine especially for events like this, could you imagine the expense of giving people off of the street glasses of Dom Perignon.

A non-technical wine writer, who enjoys the moment with the wine, as much as the wine. Twitter.com/WineRaconteur Instagram/thewineraconteur Facebook/ The Wine Raconteur
View all posts by thewineraconteur →
This entry was posted in Wine and tagged California, Chardonnay, Cook's California Champagne, Pinot Meunier, Pinot Noir. Bookmark the permalink.