Back to The Courthouse

Posted on May 1, 2016 by thewineraconteur

Once again my dinner club had another meeting at The Courthouse Grille in Plymouth, Michigan. There are a few occasions that I cannot meet with the members for various reasons, and then there are some meetings where the selection of wine offered makes me drink cocktails with my meal. I just went and researched when I joined, and it was in 1989, so that has been quite a few meals with the club. When I joined I was the youngest, and the funny thing is that I am still close to being the youngest member of the group. Over the years we have had many characters in this august society, and when I first became a member I was placed with two other men for hosting duties, which is only once a year. Our club secretary found it amusing to place me with the eldest member, in seniority, as he had joined in 1928 and even had his own radio program during the Great Depression. I still remember him vividly as I would watch him enter the room where our meeting would take place and he would select his seat. He would then count out and place twelve cigarettes to the back of his placemat and then he would lay out four “intermission” cigars next to the cigarettes. He would order two “boiler-makers” and one glass of cognac for after dinner, and he always ordered beef as an entrée, and the most delightful air about him was the way he would sweet talk his waitress. These tales go back when smoking was allowed in restaurants and the man’s constitution was close to immortal, I remember when he got sick at age 96 and three months later he was having dinner with other members that had passed away before him. 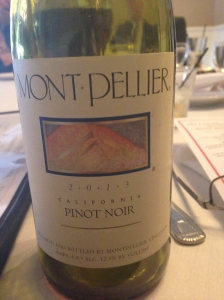 I think one of the reasons that The Courthouse Grille is so popular with the members is that they offer us seven choices for an entrée, whereas most of the time we have a choice of three. I have discussed the history of this establishment before and one of the more unique aspects is the amount of private dining areas that are there, and we have enjoyed being in different rooms. After our cocktail hour, we sat down for dinner and enjoyed a well prepared garden salad along with freshly baked bread. I was the only one at my table to have the Veal Marsala, but they make such tender veal, that I find it hard to go with any other dish.

While the restaurant has a very nice wine carte, the selections by the glass are ample, but not terribly exciting, but since I was not one of the hosts that evening, it would have been in poor taste for me to order a full bottle of wine, though I am sure that there would be acceptance by the other members that drink wine as well. I wanted to try a different wine, so that I could write about it, I realize that it can get boring, just writing about the same restaurant and the same wine constantly. I had a glass of Montpellier Pinot Noir 2013 with a California designation. While the wine may have been bottled in Napa Valley, the fruit was from across the state. The wine is made of 76% Pinot Noir, 8% Petite Sirah, 5.3% Malbec and 10.7% Proprietor’s Dry Red; I found that to be an intriguing mix. Montpellier Wines owned by Bronco Wine Company, the Fifth largest producer of wines in the United States, and they are family owned and started in 1973 and they are now international in scope of offerings. Let me say that the wine was fine, though I am not sure if in a blind tasting that I would be able to attest that it was a Pinot Noir, but at its price point, it sufficed.

A non-technical wine writer, who enjoys the moment with the wine, as much as the wine. Twitter.com/WineRaconteur Instagram/thewineraconteur Facebook/ The Wine Raconteur
View all posts by thewineraconteur →
This entry was posted in Dining, Wine and tagged Bronco Wine Company, California, Malbec, Montpellier Wines, Petite Sirah, Pinot Noir. Bookmark the permalink.