Posted on March 30, 2016 by thewineraconteur

For the appetizers we pretty much agreed on the same dishes. My Bride and my Brother-in-Law both had the Lobster and Avocado Salad with Haricot Verts and Black Truffle Vinaigrette. My Sister-in-Law and I both ordered the Sautéed Foie Gras with Apple “Tatins”, Cabbage Croquant with Calvados and Cider Sauce. Cabbage Croquant is the French way to say “crunchy cabbage.” There was sharing of the dishes going on I might add, but the Foie Gras was the winner as far as I was concerned, and I think it was rather unanimous.

The wine that was paired with Sautéed Foie Gras was a bit of a surprise, but it worked very well. Rather than a Sauterne or a Barsac the wine was Royal Tokaji 5 Puttonyos Aszu 2008 from The Royal Tokaji Wine Company, in the old days of Hungary this wine was produced by the State Monopoly and it was known as Tokay.  The Aszu refers to the special grapes that have the “Nobel Rot” as in Sauternes and the wines of Germany and are placed in special containers known as Puttonys, the plural being Puttonyos, and “5” is the highest designation of Puttonyos that is added to the regular Tokaji wine. The wine is made from Furmint, Harslevelu and Muscat de Lunel grapes. If you notice that the label is accented with red, and that is for the American market, the rest of the world gets labels that are accented with blue.

The pairing for the Lobster and Avocado Salad was Pascal Jolivet Sancerre 2014 from the Upper Loire from the Loire Valley in France. Sancerre is considered one of the two best villages in the Loire Valley for producing white wine and the varietal is Sauvignon Blanc. While Sauvignon Blanc produces great dry white wines in Bordeaux, in Sancerre the wine is much more nuanced and vibrant and can hold its own against full bodied foods, as well as a great compliment to the famed goat cheeses that are also produced there. 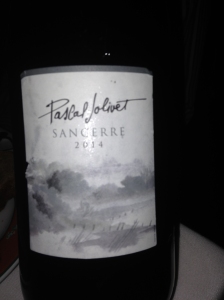 The next course was our entrée dishes and here there was much more of an assortment chosen. My Sister-in-Law ordered the Atlantic Turbot with warm Eggplant Salad, with a Coriander and Saffron Sauce. Her husband ordered the Dover Sole Meunier with glazed vegetables and a Lemon Beurre Blanc, and he had just had Dover Sole a couple of nights earlier in Louisville. It is one of his favorite dishes, and he proclaimed that it was the finest serving that he had ever had. My Bride ordered Potato Crusted Mediterranean Sea Bass with Braised Leeks and a Pinot Noir Verjus. I ordered the Cervena Venison with Poached Bosc Pear and Cacao Nibs with a Chocolate Espresso Sauce. I might add that I think that I had the finest meal of the night, in my humble opinion, I enjoy a fine plate of Venison and I like to order it when ever I see it offered. The Cervena Venison is from New Zealand (after I did some research on it) and it is farmed deer that is three years or younger, free range and grass fed with no hormones or steroids added to the feed. Even though I had no knowledge of the pedigree of the venison, it was the finest cut and cooked perfectly and I was so sad to finish the last bite; and as a side note, I always asked that the venison be prepared to the temperature that the chef thinks it should be done.

One of the intriguing aspects of the meal was that I noticed that my Bride’s dish of Sea Bass was prepared with a Pinot Noir Verjus, and one usually thinks of fish with white wine. The wine that was paired with my Brother-in-Laws Dover Sole Meunier was Bethel Heights Vineyards Estate Pinot Noir 2013. This wine is from Eola-Amity Hills which is in the center of the Willamette Valley in Oregon and the Eola-Amity Hills is a relatively new AVA as it was established in 2006. It was a great wine and I am partial to the Pinot Noir wines of Monterey and of course Burgundy and it held its own extremely well.

I was really curious as to what was going to be paired with my venison and it was Rocca di Frassinello “Le Sughere di Frassinello” Maremma Toscana DOC 2012. This wine hit all the right chords with me as it is a blend of 25% Merlot, 25% Cabernet Sauvignon and 50% Sangiovese. That this area is doing wine properly can be noted by the fact that for years Maremma Toscana carried an IGT designation and now it is DOC. By this time I was in Seventh Heaven and so were the rest of us at the table. 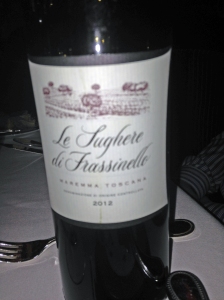