Le Cirque at the Bellagio

Posted on March 28, 2016 by thewineraconteur

Our last night in Las Vegas for this trip and we went to dinner without the children or the grandchildren, but we did go with family. My Sister-in-Law and her husband came out to Las Vegas to celebrate her birthday and we all got together for dinner, and what a meal it was, and bear with me, because this will be another three part adventure. I also said that I try not to repeat restaurants, but since our other couple had never been there, it was totally do-able. I also don’t think that I gave the restaurant enough glory and exposition in my first article and so this is my “Mulligan.”

Le Cirque began in 1974 at the Mayfair Hotel in Manhattan, then they moved to larger facilities at the Palace Hotel, and finally they moved to the Bloomberg Building. All the while under the careful and watchful eye of the founder Sirio Maccioni and his family and they are now international in scope with their famed restaurant. One of the great chefs that I have had the honor of dining at two of his restaurants Daniel Boulud worked at Le Cirque in Manhattan. Le Cirque means the Circus in French and the charming dining room at the Bellagio hotel evokes the vibrant colors and electricity of the Circus, but be assured that there are no clowns lurking, and on the other side of the windows is the famed water show fountain that most people only see from The Strip. You know that it is my kind of place, especially the original location, because they have a posted “Dress Code: Gentlemen, jackets are required for the restaurant and kindly suggested for the Café. Shorts and open shoes are not permitted. No hats allowed. Ladies, dressy and elegant. Thank you.”

As we sat down, the wine tome was handed to me, and I graciously handed it over to my Brother-in-Law, as I have drooled over all of the pages the last time I was there. I mean he blurted out as he was looking and said “what restaurant needs verticals of Petrus, Latour, Cheval-Blanc and Mouton?” Indeed, and I agreed, but that is the charm of the Le Cirque and their legendary wine cellar. We ended up ordering a bottle of wine for the table, and he and I also decided to go with the pairing selection for our meal. The ladies were happy with the bottle of wine, and it was a fine bottle. We had Inglenook CASK Cabernet Sauvignon Rutherford 2011, and I am glad to say that Francis Ford Coppola has acquired and restored the old Inglenook Estate under his Niebaum Coppola wines. The CASK wines were originally offered from 1934-1964 and represented the best of winery, and it has been resurrected again, first as Rubicon and now as CASK. While the wine is labeled Cabernet Sauvignon it is only eighty-five percent, the balance being twelve percent Cabernet Franc and the rest is Merlot. 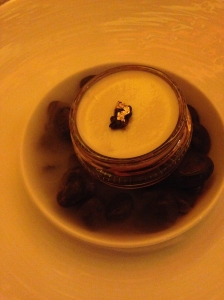 Also bear with me, as I will be posting some “food porn” and I do hope that I do it justice, as I have enough trouble photographing wine labels, but my Favorite Daughter asked me to, for this dinner. After selecting the wine and the dinner, our waiter brought out the Amuse Bouche, which is a fancy term for a small complimentary appetizer that showcases the ability of the Chef. It was about three bites of Smoked Salmon covered with Panna Cotta, a dollop of Caviar topped with Edible Gold. The Panna Cotta is sweetened cream thickened with gelatin and usually found in desserts. The Edible Gold intrigued me and I found out that it is “biologically inert” meaning that it passes through the digestive tract without being absorbed. I also found out that it is usually 22 – 24 K, as it is made with the least amount of impurities. The meal was off to a fine start.

A non-technical wine writer, who enjoys the moment with the wine, as much as the wine. Twitter.com/WineRaconteur Instagram/thewineraconteur Facebook/ The Wine Raconteur
View all posts by thewineraconteur →
This entry was posted in Dining, Wine and tagged Cabernet Franc, Cabernet Sauvignon, California, CASK, Inglenook Estate, Merlot, Napa Valley, Neibaum-Coppola Estate, Rubicon, Rutherford. Bookmark the permalink.