A friend of mine’s son is the Cub Scouts and they recently had a big fund raiser for the pack.  He found three ceramic wine bottles, that still were sealed and he thought of me.  I went and picked them up to do some research for him.  These ceramic bottles are something I remember seeing in the stores when I was a youth, they are similar in concept to the Jim Beam Bourbon bottles that people collect, only more ornate, at least these three are. 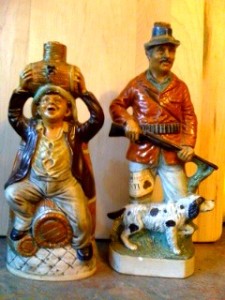 Two of the bottles are from Casa Vento winery from Italy.  The decanter with the hunter and his dog is Casa Vento Chianti, but there is no black cockerel on the bottle.  The other of a Falstaffian individual sitting on a couple of wine barrels, while he holds another wine barrel above his head with the tap open is a Casa Vento Vino Santo Duca d’Asti.  Both of these bottles have no vintage years on the labels, so I can presume that the wine was bulk table wines made for immediate drinking, and the decanters were more costly than the wine.  Both of these wines were imported by Vento Wine Import Inc. of Cleveland, Ohio, and I wonder if this was a vertical structure of the winery at one time.  I did a search of the import company and the last listing I could find was 1972.  There is a Casa Vento Winery in Italy at the present, but I could not verify, if this is the same winery on the decanters. 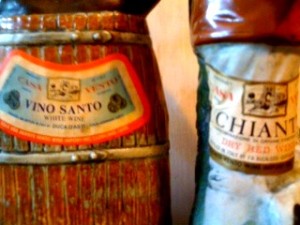 The third ceramic wine bottle which also has the cork intact with the wine enclosed is of an inebriated Fiddler with one hand holding a Wicker Chianti bottle while he is trying to keep a lamp post erect.  The label on this decanter says Vino da Tavola Rosso which just translates to as Red Table Wine.  There is also an importer’s label of the General Trading Company of Detroit, Michigan.  I could not find any information about this wine distributor. 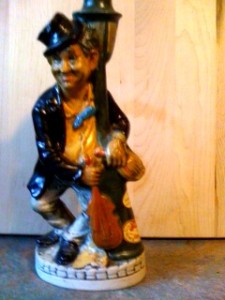 I would not even attempt to open these bottles, and for sure I would not try the wines that they hold, but they are great curios of past marketing endeavors.  I am sure they were marketed for the non-wine drinking masses, who thought that it would make a charming gift.  I did see some other examples of these decanters being offered on EBay for amounts that I am sure far exceeded the original price of the wine bottles, when the wine was fresh.  Sometimes it is just fun to do the research. 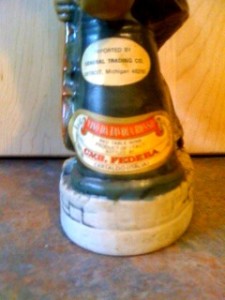