“When the moon hits your eye.

That’s amore.
When the world seems to shine.

If one has spent any time on site Facebook in the last couple of weeks, one couldn’t miss all of the assorted postings about the “Super Moon” which will be most visible on June 23, 2013.  All of this will be a short dissertation to show how my brain works, in what I learned in Junior High English Literature of a writing style called “train of consciousness.”  This talk about the “Super Moon” immediately sent me on a search of a DVD movie that we have in the house, but alas I could not find it after two days of searching and that can happen here on occasion (so I had to go to Google to find an image, which I do not like to do).  I was looking for the DVD of “Moonstruck” which is about an Italian family in New York.  One of the charming aspects of this film, besides the actual story is that some of the “family” members are not Italian;  Cher who is Armenian/American Indian, Olympia Dukakis who is Greek and Feodor Chaliapin who is Russian and the son of the famed Basso Feodor Chaliapin Sr., and as a side note I remember an interview Sean Connery gave where he warned every actor that if they were to work with the son, that he is the most natural “scene stealer” in the history of cinema.

Food plays an integral part of the film, as there are plenty of scenes in restaurants and the kitchen table.  The actual food is a minor cog in the story, but it is always there, which I can relate to coming from my nationality and the way food was always prevalent, especially if there were more than three people at the table.  In fact, I remember reading that during the entire filming of this movie, one of the leads Vincent Gardenia was always cooking on the set for the cast and crew.  I am sure that the heady aroma of food permeated the whole set and made for a more authentic feel for all involved. 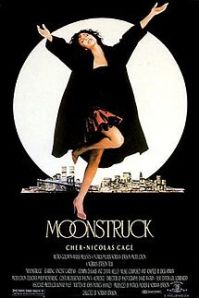 Of course after thinking about the food which is an underlying theme, there is the wine.  Now you can see how my brain makes twists and turns and can bring wine into almost any discussion or topic.  There is an earlier scene in the film where Cher’s character is in a store buying a bottle of Champagne, actually it is a bottle of G.H. Mumm & Co. from Reims, France.  One of the three fabled villages of the great Champagne region; and the major users of Pinot Noir and Chardonnay varietals that are used for the wine.  While Champagne is always used for toasting and for special occasions, one aspect of this film and the Champagne created quite a stir when it first ran.  The participants would drop a sugar cube in the fluted glass of Champagne, a very simple version of a Champagne Cocktail.  The sugar increases the effervescence and sweetness of the wine, which symbolizes the wish that your life will be the same.

“When the stars make you drool just like pasta fazool.

When you dance down the street.

With a cloud at your feet, you’re in love.

When you walk in a dream.

But you know you’re not dreaming, signore.

Back in old Napoli, that’s amore.”

A non-technical wine writer, who enjoys the moment with the wine, as much as the wine. Twitter.com/WineRaconteur Instagram/thewineraconteur Facebook/ The Wine Raconteur
View all posts by thewineraconteur →
This entry was posted in Dining, Wine and tagged Champagne, Chardonnay, France, G.H. Mumm & Co., Pinot Noir, Reims. Bookmark the permalink.