Posted on February 4, 2013 by thewineraconteur

As I continue my memories of that far and exotic land of Canada, another fine restaurant was Ye Olde Steak House in Windsor, Ontario.  I have always felt that Canadian steakhouses have a different feel about them then their American counterparts.  The old steakhouses in Canada were more genteel and had a charming “old-school” feel to them.  Ye Olde Steak House was no exception.

Since my Father’s family had grown up in Windsor after moving from Hamilton, Ontario we spent time in Windsor.  I always felt that Windsor was more of a suburb of Detroit, then a city of its own, but that may have been because I remember Detroit in its hey-day and Windsor was still quiet and had not blossomed to the city it has now become.

Ye Olde Steak House specialized in steaks, of course, and they also had seafood.  They were known for their prime rib, and it was the first restaurant that I ever went to that wrapped fillets with bacon.  They had a classic shrimp cocktail and a good basic salad that accompanied their steakhouse menu.  The service was excellent, in that very “old school” tradition and it just helped with the feeling of elegance.  This was a restaurant to go to for that classic two to three hour dinner, and cocktails were king at the time.  They also had a stellar Black Forest cherry torte for dessert. 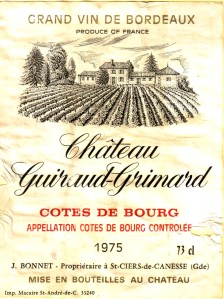 The wine list was not large, but at the time very few places had large wine lists, as it was not as popular as it has become today.  When I was there, in my youth I felt that French wine was the only thing to order, of course, to be truthful, that was what was usually carried.  The American wine revolution was just under way, and in Canada wine was not being produced like it is today as well.  I remember being proud of myself for trying a lesser know area of Bordeaux, the Cotes de Bourg.  The wine was listed under Bordeaux and even the label says Grand Vin de Bordeaux, because that is the type of wine produced from this area.  I had a bottle of Chateau Guiraud-Grimard 1975 and it was just a great choice to pair with a steak.  While the Cotes de Bourg is not as lush and bold as a First Growth, neither is it priced like one.  This area reminds one of a Bordeaux Superior or even some wines from the Medoc.  It is well worth the investment, I feel, as it is easy on the wallet and yet it still delivers that taste, one is looking for in a Claret.

A non-technical wine writer, who enjoys the moment with the wine, as much as the wine. Twitter.com/WineRaconteur Instagram/thewineraconteur Facebook/ The Wine Raconteur
View all posts by thewineraconteur →
This entry was posted in Dining, Wine and tagged Bordeaux, Chateau Guiraud-Grimard, Cotes de Bourg, France. Bookmark the permalink.