A Barbera and a Zin

Posted on April 28, 2019 by thewineraconteur

It was time again for me to visit the Fine Wine Source for my monthly wine club bag of goodies.  I really think that is what is fun about having a wine club, because one never knows what to expect when one goes there, because we can all easily get into a rut on almost any subject.  When I was selling clothes, it was an easy phenomenon to see men always drift to the same color and patterns of suits consistently, because they didn’t want to put that much thought into the purchase.  Wine is the same way; most people find something they love and most try not to stray too far from that found love.  I even find myself doing that, unless I force myself to try something new, and sometimes it is to my Bride’s chagrin. 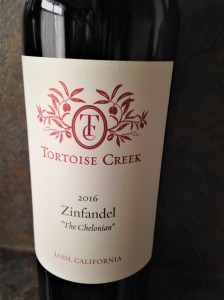 The first wine in the selection was the Tortoise Creek “The Chelonian” Zinfandel 2016 from Lodi, California.  I have been having more and more wines from Lodi in the last couple of years, and so far, I haven’t had a bad wine, so that says a lot about the pride of the winemakers.  My initial thoughts originally about Lodi was that it was almost entirely Zinfandel, so for years I kind of side-stepped the area, but I have acquired not only an appreciation for Zinfandel and for the other varietals that we have tried from there, that we would like to one day make a trip there.  Tortoise Creek Wines is part of Master Wines and hence you will see the Tortoise Creek label some from California and some from France.  Tortoise Creek has partnered with the Chelonian Research Foundation for turtle and tortoise research, and starting with the 2009 vintage they donate a portion of the proceeds to this non-profit foundation.  This wine is made abiding to the Lodi Rules that I tend to believe everyone there now agrees to, and the rules may grow in to other areas as well.  This wine is a blend of fruit from the Clements Hills region and Lodi AVA.  The wine is almost all Zinfandel with five percent Tannat and five percent Petite Sirah.  By using a gravity flow system, the fruit is destemmed, but not crushed and they use whole cluster fermentation.  The wine is then aged for six months in oak.  According to all the notes that I have read this wine will offer dark fruit and some vanilla and should work well with most meats, and I think especially barbecues. 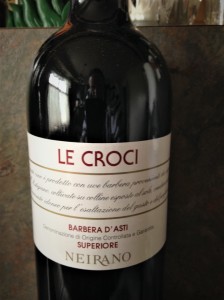 The second bottle is Tenuta Neirano Le Croci Barbera D’Asti Superiore DOCG 2016.  The Sperone family has been making affordable wines for four generations, originally in Puglia and in 1983 they purchased seventy-five acres in the Piedmont.  The fruit for this wine came from Le Croci (The Crosses) vineyard and the wine is entirely Barbera.  The fruit is hand harvested and has three weeks of maceration and four weeks of fermentation in Stainless Steel.  The juice is then aged for one year in small oak cask and then an additional six months in the bottle before it is released.  I am sure that this wine will be a nice dark wine with dark fruit tones, a good showing of tannins and a balanced acidity, features that I expect from a Barbera and hopefully some black cherry as well.  This is another wine that will work well with red meats or a good rich sauce for pasta, and who knows maybe both will be enjoyed on the same evening at a party.  Time will tell.

A non-technical wine writer, who enjoys the moment with the wine, as much as the wine. Twitter.com/WineRaconteur Instagram/thewineraconteur Facebook/ The Wine Raconteur
View all posts by thewineraconteur →
This entry was posted in Wine and tagged Barbera, Barbera D'Asti Superiore, California, Italy, Le Croci, Lodi, Petite Sirah, Piedmont, Tannat, Tenuta Neirano, The Chelonian, Tortoise Creek Wines, Zinfandel. Bookmark the permalink.

3 Responses to A Barbera and a Zin