What Happens in Vegas…

Posted on March 3, 2019 by thewineraconteur

Snow on the palm trees, such an idyllic scene. We go to Las Vegas quite often, and we both went even before we had met, so that is lot of Vegas history and trips.  Lately I am beginning to feel like the character Joe Btfsplk from the old Li’l Abner cartoon strip who always had a black cloud over his head.  Last year we went to Las Vegas and the weather in Detroit was warmer, just a “fluke” everyone said.  This year, our flight was delayed for departure originally for an estimated three hours.  Why you ask?  Las Vegas and McCarren Airport was under snow and they have no equipment for snow removal or for deicing the planes.  They had to do it, the old-fashioned way and let Mother Earth use the sun to melt the snow and ice from the planes and the tarmac.  In case, you don’t know; Las Vegas is in the desert and was a sleepy little outpost until the world discovered that gambling was legal there. 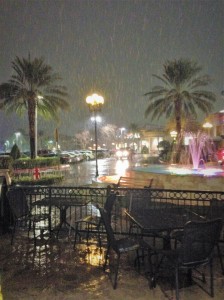 I guess no one told Las Vegas about Global Warming or the city just doesn’t care.  I am from Detroit and we are known for some great winters, but the “dry” cold that I experienced there, seemed to be even colder than the “wet” cold of Detroit, and I only mention it, because when you are there and it is over 100° everyone tries to allay your feeling that your body is melting, because it is a “dry” heat.  I am not a meteorologist, but I have observed some weird things.  I mean there is a viral meme on Social Media that shows Hell freezing over, but that is Hell, Michigan and they actually get cold and icy weather, but Las Vegas is supposed to have silicon enhanced young ladies cavorting in bikinis or less, because of the arid weather. 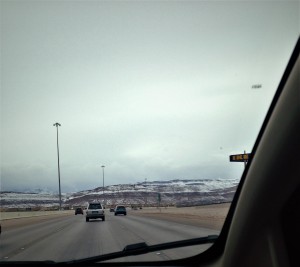 When we landed, picked up our rental car and started to drive Summerlin, it felt like we were in Detroit, because there was snow on some of the cars, and on the grassy areas that is now part of the landscape of Las Vegas.  Of course, we don’t have snow on the mountains and that looked pretty from the freeway as we were driving.  Later on, after we went and bought some wine for the room, and some noshes as well, we were taking everyone out for dinner, and we only had one non-show, we handed out birthday presents for the year and Easter presents as well.  The wine stories will return, I just had to set the stage, and I never want to discuss the joys of a trip, until I am back. 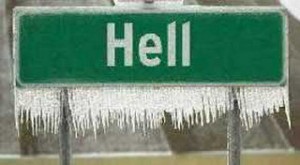