Posted on March 5, 2019 by thewineraconteur

World travelers we will never be.  I mean we are getting better, as we can now travel for a week or so, with two suit cases checked, two over-head bags and two carry-on bags.  I am sure the Queen schleps more than us, but we manage.  Half of one checked-in suit case was nothing but birthday gifts, gift bags, tissue paper and greeting cards and envelopes.  Travelling is much harder, and you cannot pack wrapped gifts any more, so we have to work around it.  As most of you know, we tend to celebrate birthday honorees on one day each month with a dinner party; this year we celebrated all the out of town honorees with one dinner, with my Bride recording the opening of each present.  We even found a restaurant that would allow us to bring in a birthday cake, and through our years of going to Las Vegas, we have even found a bakery that we like.

We were only missing one birthday honoree, our big football player jock and high schooler, but we knew that we would see him later, but it would have been grand to have a big family picture done, the first night.  We were all meeting at Grimaldi’s, a famed pizzeria where the original location is located under the Brooklyn Bridge, and yes, all of these Detroiters were going to have a New York style pizza.  Grimaldi’s is an old-fashioned coal brick oven pizzeria.   I was really amazed that the menu was so concise with its offerings, it was pizzas and salads, for the most part, there was over thirty different toppings and white pizzas too, but for an old guy like me, it was the good old-fashioned foldable pizzas that I grew up with, I mean pizzas are to be held and not eaten with a knife and a fork.  The important thing was that we could get all of the grandchildren happy with something that they would eat, I come from an era, where something was ordered and everyone ate it, but that is long gone.  After everyone ate, the few remaining slices were boxed up, and everyone got to open up their birthday present and card, and their Easter cards as well.

Our waiter started us off, passing around the menus and explaining how to order and his suggestions.  When we got to the wine list, he told me, that there were a couple of bottles that I could have at half price, because they were in the midst of having new menus printed and there were a couple of wines, that they were not going forward with.  I figured how bad could a Sonoma Cabernet be, and I was tickled pink with the selection.  We had a couple of bottles of Arrowood Vineyard and Winery Sonoma Estates Cabernet Sauvignon 2013.  Arrowood was founded in 1986 and in 2006 became part of the Jackson Family Wines.  The fruit for this wine was harvested from Knights Valley, Sonoma Valley and Alexander Valley.  The wine is a blend of eighty-nine percent Cabernet Sauvignon, ten percent Merlot and one percent Cabernet Franc.  The wine was aged for eighteen months in a mix of oak, with thirty percent new.   This may have been one of the bargains of the year for me, even those that only humor me, by having a glass of wine, had seconds and thirds, because this was just packed with flavor.  The black cherry notes were evident to everyone that had a glass or two, with a nice long finish.   I was really impressed with this wine and really appreciated the bargain, and so did my Bride. 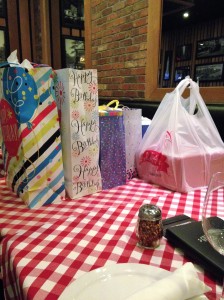 A non-technical wine writer, who enjoys the moment with the wine, as much as the wine. Twitter.com/WineRaconteur Instagram/thewineraconteur Facebook/ The Wine Raconteur
View all posts by thewineraconteur →
This entry was posted in Dining, Wine and tagged Alexander Valley, Arrowood Vineyard and Winery, Cabernet Franc, Cabernet Sauvignion, California, Jackson Family Wines, Knights Valley, Merlot, Sonoma Estates, Sonoma Valley. Bookmark the permalink.

2 Responses to Birthdays at Grimaldi’s