Posted on February 13, 2019 by thewineraconteur

It is just amazing what you will find when you go tasting wines, and I try to taste wines as often as I can.  When I first started my wine education back in high school, I had the lofty goal of wanting to try wines from all the countries and all the regions that produced wines.  That goal was soon kaput, as where I lived, wine selection was much smaller and not as diverse as it is today.  I also found out rather quickly that even in France, some of the regions could not compete with Bordeaux and Burgundy, and that discovery was with a very young and totally unsophisticated palette, though I question how sophisticated it has evolved after all of these years.  For ages I think I went out of my way to avoid wines from the Languedoc-Roussillon, because I thought of it as only table wines and not that great.  It was to my chagrin as I started hearing about and reading about how the wines from this region were being lauded, and I kept telling myself that after forty to fifty years, I should eventually go back and give them another try.  I was doing just that when I was at the Fine Wine Source in Livonia, Michigan and I guess that I am glad that I tried some wines again. 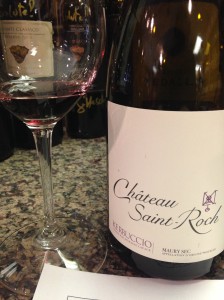 Domaine Lafage is one of the popular and larger estates in the Roussillon.  Winemaker Jean-Marc Lafage also works as a wine consultant in other countries as well.  Domaine Lafage produces dry red, white and rosé wines under the Cotes du Roussillon AOC as well as sweet wines from Maury, Rivesaltes and Muscat de Rivesaltes.  In the last decade they have truly been discovered for their big, over-the-top style that is the trademark of one of the major voices in the wine industry.  With wines scoring in the mid nineties and at very popular price points the wines are being an understandable hit.  The Lafage cellars are just outside of Perpignan, they have an aggregate total of about four-hundred acres across the Languedoc-Roussillon with vines that are centenarians.

The first wine that I tasted was actually a refresher for me, as I actually wrote about it back in September and I have bought more of it, almost every time I have ventured into the shop and will continue, until I cannot buy any more.  I have also found some of the other bloggers are touted this wine as the buy of the year and I have to agree with them.  Domaine Lafage Bastide Miraflors Vielles Vignes Cotes du Roussillon 2018 has been getting rave reviews.  The Bastide Miraflors is a custom cuvee and is a blend of seventy percent Syrah and thirty percent Old Vine Grenache.  After six weeks of maceration the Grenache is aged for twelve months in concrete and the Syrah is aged in French Oak.  This is a deep purple wine that is made to be enjoyed immediately or in the next couple of years, and it has a heady 14.5% Proof.  I usually don’t quote ratings, but for a very affordable wine Robert Parker gave this wine 94 Points.  The owner of Fine Wine Source says “this is the best Syrah based wine you can buy for the money!  Rich yet elegant on the palate with a silky and satisfying finish.”  I next had Chateau Saint Roch Kerbuccio Rouge 2015 from Maury and for years Maury was noted for their sweet wines, but the dry wines were actually given an AOC in 2011.  Domaine Lafage became the owner this estate in 2007.  There is not much production information on the wine, but it is a blend of forty percent Grenache Noir, forty percent Syrah and the balance is Mourvedre.  Another popular price wine to score 94 Points and I will concur that it is big, some great pepper and a good long count finish.  Both of these wines are what I would call “no-brainers.”