Posted on February 9, 2019 by thewineraconteur

You know the old expression “if it isn’t broke, don’t fix it,” I think that is the perfect description for Boodles in Madison Heights, Michigan.  You could walk or drive by it constantly without really noticing it, because it is a cinder block building by appearance, and today everything is a façade, but not at Boodles.  The restaurant opened in November of 1985 as a romantic supper club evoking the feel of the neighborhood dinner clubs in Manhattan, back in the day, when going out was the norm.  While the outside might be unimpressive, the inside was what was expected back in the day, with dark wood, and frosted glass and a piano player for the weekend.  To this day, depending on the location of your table, you may still experience table side service for Caesar Salad, Chateaubriand and Steak Diane to name a few.  I was also surprised but happy to see that there were plenty of younger people there, having dinner, which is always great to see.  Of course, for me, dressing for dinner hasn’t changed since the glory days of the Rat Pack, and this restaurant is so in tune to that era, even with the music, as we could hear the ivories being tickled. 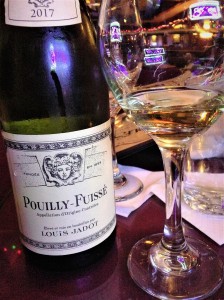 It is always much more pleasant to be out for dinner, and a real added bonus is that the only television set was in the bar area, and we only saw the back of the monitor.  We started off with a couple of appetizers that were shared by all; one was Escargot with mushroom caps, butter, garlic, white wine and cashews and the other was Crab Stuffed Mushrooms with Boursin and a Lobster sauce.  Next was a good old-fashioned bread basket, and each dinner came with either a house salad or soup, and there is something refreshing that not everything has to be ala carte.  Our friends tried two different dishes, one was Michigan White Fish that the restaurant offers three different ways and she had the Dijon herb encrusted while he enjoyed one of the specials off of the blackboard which was a classic version of a Lamb Shank.  My Bride had Seared Ahi Tuna and Shrimp with Sesame Seeds, spinach, julienned vegetables, rice, and a Chili Thai Sauce, while I had Veal Oskar, three pounded medallions with asparagus, crab and Bearnaise Sauce.  We would have watched our desserts prepared tableside, except that we were in an elevated section that the floating cooking station could not reach.  The two desserts were for two, so they were split in half to make it easy, so there was an order of Cherries Jubilee and an order of Bananas Foster.

There was a Negroni, a Cosmopolitan and a Bloody Mary ordered while we were there, but I started of by ordering a bottle of Louis Jadot Pouilly-Fuisse 2017, a Chardonnay from the Maconnais. Louis Jadot began with his first vineyard Clos de Ursules in the 1820’s and became a negocient in 1859 based in Beaune, one of the centers of the Burgundy region of France.  The Louis Jadot firm has a portfolio of wines from the basic regional wines to some of the most lauded vineyards in the region.  Pouilly-Fuisse is considered one of the finest regions for white wines in Southern Burgundy.  There are no Grand Cru listings, there are a few vineyards to watch for and mostly one goes by the reputation of the grower or the negocient.  The grounds are all basically limestone and the terroir from this region gives the Chardonnay a taste unique to the area.   The grapes are harvested in small batches and gently pressed.  They are aged in French Oak, of which a third are new, and the aging goes for about fifteen months on the lees.  The wine is very crisp with the minerals from the limestone shining through.  Then came Rodney Strong Knights Valley Cabernet Sauvignon 2015 from Sonoma County.  Knights Valley is in the northern end of Sonoma County and the terroir is based on the grounds of the volcano Mount Saint Helena.  It was originally discovered and planted by Thomas Knight and prospered until Prohibition.  The area is famed for Cabernet Sauvignon, which is basically two-thirds of the yield.  Rodney Strong Vineyards was founded in 1959 and Rodney Strong was considered one of the pioneers of Sonoma County.  In 1989 the Klein family bought the winery and kept Rodney Strong on as a consultant until he retired in 1995.  This wine is almost all Cabernet Sauvignon, except for eight percent Malbec and it was aged for eighteen months in French Oak, of which half was new.  This was a big California Cabernet that is what the public expect these days, especially in a popular price wine and it was very easy to drink.  I think we had the most popular varietals, perhaps not the most popular of sellers, but they had a nice wine list for their menu.  If you are curious if we would go again, that is most certainly an affirmative, as we have been going there forever it seems, and we plan on continuing.  I think every town, needs a place to hang your hat, that isn’t chasing the latest culinary trend, but just keeps giving a real bang for the buck, in an atmosphere that doesn’t need exposed bricks and pipes.

A non-technical wine writer, who enjoys the moment with the wine, as much as the wine. Twitter.com/WineRaconteur Instagram/thewineraconteur Facebook/ The Wine Raconteur
View all posts by thewineraconteur →
This entry was posted in Dining, Wine and tagged Cabernet Sauvignion, California, Chardonnay, France, Knights Valley, Louis Jadot, Maconnaise, Pouilly-Fuisse, Rodney Strong Vineyards, Sonoma County. Bookmark the permalink.