I Try to Have Fun

Posted on November 7, 2018 by thewineraconteur

As I reflect on my past career, I had fun.  Through out the years I have encountered some people on both sides of the counter that if I could I would have avoided, but I guess that is true for most people.  My vocation is what fueled one of my avocations and they worked side by side.  While I was educating my customers about clothing, they were educating me about the world beyond Sixth Avenue.  While I may have started my learning of wine; talking to others that could “walk the walk and talk the talk,” led me down many avenues and by ways that I may have missed, like fine dining and resort areas.  I was a clothier, because my heart and soul enjoyed the business.

So here I was helping out at a Seventy-fifth Anniversary party and a Trunk Show.  A Trunk Show is an event where a vendor comes and helps educate the clients about the nuances of the product, some times with knowledge that the salesman and especially a clerk may not know.  The vendors all looked like clothiers, because they had an inner panache that defies the salesman who looks like he is going to work.  The salesmen were allowing the clothiers their moment in the sun and it was the customers that gained from the moment.  There was plenty of tumult going on, and one of the gimmicks that was planned and it would have been interesting, fell through and it probably was just as good, because the store was packed as it was.  Can you tell that my energy level was up several notches for the evening, especially between the discussions, noshing, selling and wine tasting? 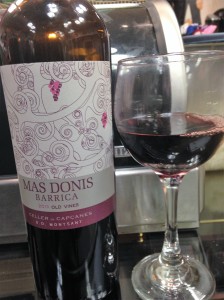 We started the evening off with some Syrah, and the last bottle of wine that I tasted also had some Syrah.  All the wines that I enjoyed with the customers were from Spain and so was this one.  The Cellar Capcanes Mas Donis Barrica Old Vines 2013 was a fine wine to end the evening with.  The Cellar Capcanes is a wine cooperative that began in 1933 and originally grew the fruit in bulk and sold it to other winemakers.  They eventually shifted gears and began winemaking and they are even in the manufacturing of Kosher wines, which is a good niche market, and they even produce box wines.  The cooperative when they are producing special wines like Mas Donis Barrica are pleased to state that the fruit comes from Montsant DO in Catalonia, and the name Montsant is from the Montsant Massif which means “Holy Mountain” and the designation was approved in 2001.  This was a very interesting blend of Garnacha, Merlot and Syrah.  The juice was aged for nine months in a mix of French and American Oak, then the juice was blended and aged for another six months in a tank before being bottled.  I do hope that potentially in the future, some salesmen will acquire the knowledge and savior-faire to be a clothier and will be able to discuss with a customer more than a “slider.”

A non-technical wine writer, who enjoys the moment with the wine, as much as the wine. Twitter.com/WineRaconteur Instagram/thewineraconteur Facebook/ The Wine Raconteur
View all posts by thewineraconteur →
This entry was posted in Wine and tagged Catalonia, Cellar Capcanes, Garnacha, Mas Donis Barrica Old Vines, Merlot, Montsant, Spain, Syrah. Bookmark the permalink.