Posted on November 5, 2018 by thewineraconteur

In the United States, peerage ranking is not really taught, so suffice it to say that a Marquis is a nobleman below a Duke, but above an Earl or a Count.  The most famous Marquis known in the United States is probably the 9th Marquess of Queensberry, whose name is applied to the famous code of boxing or pugilism.  Now that I have that out of the way, I will continue talking about the event where I was helping a store celebrate their Seventy-fifth Anniversary, which is quite an achievement, and when you realize that the store sells Men’s Clothing, that is monumental.  The majority of the work force, even among the white-collar occupations now dress as if they are blue collar, and I sometimes think that there must be contests among the divisions within a corporation of who can dress the slovenliest and still collect a paycheck.  As a retired clothier, I belong to another era, and I think I even revel in the concept that I still enjoying dressing for dinner with my Bride. 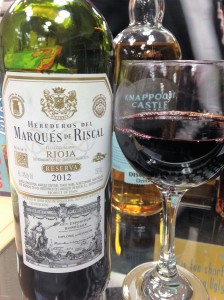 I digress, as I often do, but I was actually discussing a clothing store, one of those bastions of a former society.  When I was a kid, most neighborhoods had a clothing store, and one didn’t even have to go downtown.  The store that I was assisting has survived the perils of today’s attire, and where there were actually three men’s stores on the same block in this city, they are the only one left.  They were doing the party up, extremely well.  They had representatives from some of their vendors in attendance and a full assemblage of employees, except for one, who was on his honeymoon, and I think that is cause for dispensation.  There was plenty of food proffered by different restaurants in the city as well.  Yours truly, even noshed between assisting of customers during the evening, just like the old days of retailing.  From appetizers and hors-devours to plates of Sirloin-tips to even “Sushi,” and I did not sample the wares, one day I may actually try Sushi, but it will be in an honest to goodness Japanese restaurant and nothing less.

I must say that the beer and liquor choices were pouring quite generously and the customers were having a grand time.  I was watching the wine pour and giving little asides about the wines to any customer that wanted a bit more information.  The third wine that was opened for the customers was Marques de Caceres Crianza Rioja 2014, and just so that you know Marques is the Spanish spelling of Marquis, and yes, I do get crafty at times.  Rioja and Sherry are probably the two most famous wines of Spain and Rioja was the first region to receive DO status in 1933 and in 1991 the first to receive DOCa rating.  According to historians’ wine has been recorded in this are since about 200 BC, but slowed down immensely during the Moorish Occupation of the Iberian Peninsula, and it has slowly and gradually return and it is now a major industry in Spain.  Marques de Caceres was founded in 1970 by a family that had been in the wine industry for most of the century and the winery is still owned and operated by family members.  The wine begins with manual harvesting of the fruit and is aged for twelve months in sixty percent French Oak and the balance in American Oak; and the barrels are split equally between new and 2, 3 and 4-year-old (the maximum) barrels.  Since this wine is a Crianza it is required to have an additional one year in the bottle before it can be released for sale.  This wine is a blend of Tempranillo, Garnache Tinta and Graciano.  After this delightful wine was finished, lo and behold I see one of my favorite wines being opened and of course I had a generous pour.  The wine not only had to be uncorked, but the famed “chicken-wire” wrapping that was designed to halt counterfeiting also had to surmounted.  They were opening the legendary Herederos del Marques de Riscal Rioja Reserva 2012, probably the one Rioja that I have had more of, than any other wine from Spain and it was even accessible back in the early ages when I first discovered wine.  This wine was founded in 1858 by a Spanish diplomat that had lived in Bordeaux and he brought back some concepts that were probably a bit heretical in the day.  The wine became so popular that the wire mesh was the way to insure the quality of the wine, and in fact part of the label was glued to the mesh, now the mesh is just a quaint tradition that is maintained, and I might add that this winery has a fantastic library of their wines going back to the very early days and the wines are still reported as glorious when opened.  The Marques de Riscal is the majority shareholder and winemaker of the company to this day.  This wine is a blend of Tempranillo, Graciano and Mazuelo.  The wine is aged for twelve months in barrels and then is aged an additional three years in the bottle, before it is released, because it is a Reserva.  The wines added to the festivities of the evening and made a lot of customers very happy.

A non-technical wine writer, who enjoys the moment with the wine, as much as the wine. Twitter.com/WineRaconteur Instagram/thewineraconteur Facebook/ The Wine Raconteur
View all posts by thewineraconteur →
This entry was posted in Dining, Wine and tagged Crianza, Garnacha Tinta, Graciano, Marques de Caceres, Marques de Riscal, Mazuelo, Rioja, Rioja Reserva, Spain, Tempranillo. Bookmark the permalink.