Posted on October 16, 2018 by thewineraconteur

After a couple good winery visits we were ready to check into a hotel and have dinner.   We planned on visiting wineries in the Leelanau Peninsula, because that would have us close to Frankfort, which I have written about several times this year and in the past.  We had to make a quick stop in Frankfort for business, actually for my Bride who had packed some materials for one of her account executives who covers the whole northern part of the lower peninsula.  When we were deciding what to do after Petoskey, knowing that we had to drop off the materials, I suggested that we stay at the historic Hotel Frankfort, they have a fine dining room, but it is only open for dinner and every time we had been in the town it was during the day, because if we were there at night, we had already had prior reservations.  The hotel is almost ninety years old on the main drag of the downtown and only about two blocks from a beautiful beach, and about the same distance to the huge marina.  The hotel has seventeen very good size rooms if our mini-suite was indicative of the other rooms.  There was only one thing we forgot to inquire about, they don’t have an elevator.  I lost track of how many trips we had to make to unload the car of everything we needed, we do travel with a portable refrigerator that goes from the car to a hotel room.   Also, three cases of wine get rather heavy going up even one floor (I guess I am getting old).  I did suggest the hotel, but it was really a nice place and we survived. 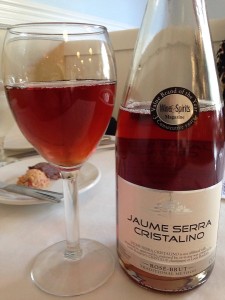 The Dining Room was a very nice with that genteel turn of the last century ambience.  The hotel also has a bar, but it is actually across the lobby from the dining room, so if there was any rowdiness because of an athletic event, it would never disturb the guests.  My Bride had the soup of the day, but I forgot what it was, and I started with a garden salad.  My Bride had ordered the Jumbo Lump Maryland Crab Cakes served with Lemon Aioli, and I might add that the cakes were large enough, that I had to finish the second one for her, and I am that kind of guy.  I went native that evening and I had the Broiled Lake Superior Whitefish with essence of Lemon Oil.  I am not a real big fan of whitefish, but once in a while, if I figure a place is going to do it right, and it is fresh, I will order it.  I mean it is hard in Michigan, especially as you go north, not to encounter whitefish.  After dinner we split a Crème Brulee along with some coffee.

I got to the dining room before my Bride, as she was on the phone, and I wanted to make sure that we honored our reservation, and by the time we left, the room was almost to capacity.  After all that schlepping up and down the stairs, I had kind of cooled off a bit to get into my sport coat for dinner, even on holidays, but especially in resort towns I do like to dress for dinner.  I needed some additional assistance to cool the system down, and I look at the wine carte, of the wines by the glass and I ordered the Vista Point Vineyards Pinot Grigio-Colombard NV.  This was a California wine that as far as I was concerned was good for quaffing and was a great compliment to the tumbler of water, and I might add that it was a generous pour of this wine.  There really was no nuance or craft involved in the production of the wine, but it hit the spot for what I wanted at the moment.  When my Bride showed up, I picked something festive and a type of wine that we had not encountered the entire trip.  We ordered a bottle of Jaume Serra Cristalino Rosado Brut NV, a Cava from Spain.  This is a wine that uses the Metodo Tradiccional Cava from Spain by J. Garcia Carrion.  The sparkling wines of Spain have been made in the proper way since the earliest years of the last century and was marketed as Champana, until France flexed their muscles and declared that they were the only country to produce Champagne.  The Spaniards came up with a novel new name, not a geographic location, but from the method that the wines are stored and that is in caves, hence Cava, and while they are a bit looser with the designation, ninety percent of the Cava is still produced in the Catalonia region.  Originally the varietals for Cava were Macabeo, Xarel-Lo and Parellado, since 1986 Chardonnay was approved, but since this was a Rosado, the most popular grape is Trepat.  Trepat is indigenous to Northeast Spain and is an authorized grape for blending for Cava, in fact most Rosado Cava wines are pure Trepat, but this wine was sixty percent Pinot Noir and the balance was Trepat.  There wasn’t much of a nose to the wine, but the most striking feature of the wine was the raspberry color, which we both found rather unique.  The next morning, while my Bride went to church, I went and packed the car and we were ready to go home.