Posted on October 4, 2018 by thewineraconteur

We found ourselves up in Petoskey, Michigan again for a few days of business and pleasure.  My Bride was attending a board meeting and I was the tag-along spouse, who for me it was all pleasure and then she would also end the trip with some pleasure time.  Petoskey for those that are not familiar with the State of Michigan would be located in the northwest quadrant of the Lower Peninsula on the water and had a long history of originally fur trapping and trading, to lumber and limestone, to now a great year-round resort destination for all of the pleasures that the state has to offer.  Some of the Nick Adams stories by Ernest Hemmingway are based in the area, and a couple of diverse luminaries would be the famed Civil War historian Bruce Catton and the actor Hal Smith, who if the name does not ring a bell, but you are of a certain age bracket will remember the lovable inebriated Otis who was part of the charm of the old Andy Griffith Show that may run for ever, because of cable television.  I am not sure of how many states in the Union have a State Rock, the Petoskey Stone belongs to Michigan is still a stone that lures the hobbyist.  The Perry Hotel was built in 1899 during the infancy of tourism for the entire region and was one of some twenty luxury hotels that were built to take advantage of this new-found business, and it is the only one that is still in operation and a year-round destination.  One of the original reasons that it was considered a luxury hotel, besides it views of the water, is that unlike most of the buildings of the day, the hotel was built of brick, and was considered fire proof. 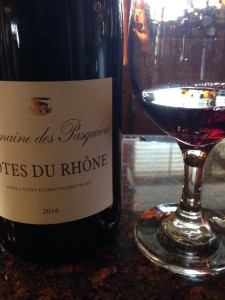 The Perry Hotel was the site of the board meeting and all of the participants were staying there as well.  There was an afternoon meeting, followed by a cocktail hour and then a dinner, the next day there was a breakfast, another meeting and then everyone went on their merry way, though we decided to stay up there afterwards and relax as it was a five-hour drive to get there.  The custom of the hotel, when they have a major group is to turn over the H.O. Rose Dining Room over for their use.  During the cocktail hour portion of the night, a large table was set up with an assortment of hot and cold appetizers for everyone to nosh on.  Since this is Michigan, the House-Smoked Whitefish was delicious, but so was the Smoked Salmon, and I did have to have some fruit, vegetables, cheese and crackers.  The dinner for the evening started with a Michigan Salad, which has some cherries mixed in, if you are new to the state.  The entrée for the evening was a version of Surf & Turf, which had salmon and a petite filet mignon.  The dessert was a Chocolate Mousse presentation, and everyone was well sated.  After the dinner, my Bride has a long history of instigating the time-honored Michigan practice of playing Euchre and they found some suitable tables on the porch verandah just off the dining room, so I snuck back to the room to make notes and catch up on the computer. 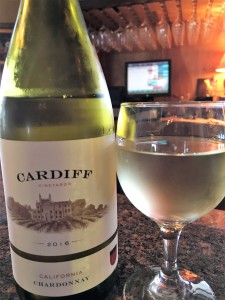 I found it interesting that the Stafford’s Perry Hotel as well as the other hotels in their limited local chain have the Stafford’s Wine Collection in conjunction with the Oakbow Cellars of Napa Valley.  The collection consists of a Pinot Noir from Carneros, a Chardonnay from Russian River, a Cabernet Sauvignon from Napa Valley and a Sauvignon Blanc from Rutherford; they all sounded interesting and delightful, but none of them were offered at the bar for the party.  I guess these wines were selected to be the featured wines, so as not to compete with all of the local Michigan wines in the area.  We started off with Cardiff Vineyards California Chardonnay 2016.  This was a softer and lighter Chardonnay and I would opine that it had a short aging period in Stainless Steel, because it was not buttery, but a bit fruit forward and a touch sweet, as I watched, it was a good crowd pleaser.  The red wine that I chose for my Bride and I for dinner was Domaine des Pasquiers Cotes du Rhone 2016.  Domaine des Pasquiers offers a couple of different wines from this region, and this was their basic wine, a blend of Grenache and Syrah.  The grapes spent from ten to twelve months aging, before bottling and it was a decent wine from the region.  Over the years I have always selected a Cotes du Rhone if it was offered, especially from a limited wine list, and I have only been disappointed a couple of times.  Our trip was off to a great start.

A non-technical wine writer, who enjoys the moment with the wine, as much as the wine. Twitter.com/WineRaconteur Instagram/thewineraconteur Facebook/ The Wine Raconteur
View all posts by thewineraconteur →
This entry was posted in Dining, Wine and tagged California, Cardiff Vineyards, Chardonnay, Cotes du Rhone, Domaine des Pasquiers, France, Grenache, Syrah. Bookmark the permalink.