Posted on August 31, 2018 by thewineraconteur

I recently picked up the monthly pair of wines from the Fine Wine Source Wine Club, our newest club and quite close to the house.  While it kind of seems odd to see Lodi and Puglia together in the title, the two wines were from these areas.  The two areas were both bulk grape growing areas at one time and now most of the farmers are making the wines in-house or in collectives.  I also think of both areas as excelling in a grape that is the same, in Italy it is Primitivo and in California it is known as Zinfandel, or they are so close depending on who you talk to, and then it seems that every seems to think that it came from Croatia where it is known as Crljenak.  While I really did not do any real research, I am sure that one can find a Rosé wine from Puglia, especially know as everyone seems to be producing one. 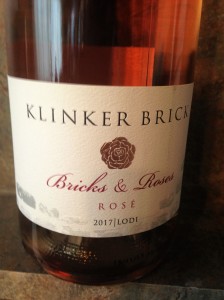 Speaking of Rosé, the first wine is Klinker Brick Winery “Bricks & Roses” 2017 from the sub district of Lodi-Mokelumne River of Lodi AVA.  I have only recently discovered the Lodi wines personally, though I have read about them and Klinker Brick Winery is one that I have actually tried six of their wines and this will make the seventh.  Klinker Brick Winery is into its Sixth Generation, but they began as grape farmers and would sell their fruit originally to the home wine makers and Zinfandel was the main crop in this area. Eventually they began selling the crops in the latter part of the 1900’s to other wine makers and eventually they took the plunge themselves as there was a strong demand for their crops. They have about sixteen plots of land mostly along what is known as the Lodi-Mokelumne River as well as some in the Clements Foothills. They produced their first bottle of Zinfandel in 2000, and their first Syrah in 2001.  This wine is a blend of Grenache, Carignane, Syrah and Mourvedre and while I could not find any production notes, I will venture to say that it was done in Stainless Steel to maintain the freshness and crispness of the grapes.  While I did not do a tasting of either wine from the club, I noticed that this wine has a beautiful salmon color, and it was described as having fresh summer fruits with a clean and light acidity.  The owner of the shop described it as rich and full flavored…not a wimpy Rosé. 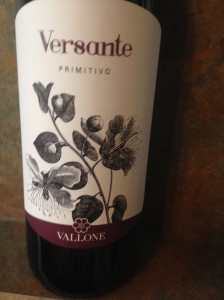 The other wine is a Primitivo which is usually a big and bold in your face wine, whether as Primitivo or as a Zinfandel, and as I have stated often, for years I shied away from these wines as I grew up drinking homemade “Dago Red” as a kid, which was usually fined with egg whites and for years that was all I could taste, but in the last ten years or so, I have cautiously been dipping my toe in the water for these wines again and I have enjoyed what I have encountered, and I still do get bottles of the homemade stuff.  The second wine is Agricole Vallone Versante Primitivo Salento IGT 2016 and I was told that this is the first time this wine has been offered in Michigan.  Agricole Vallone was founded in 1934 with one-hundred-seventy hectares of vines and other crops, and the grapes were sold to the local cooperative.  It was only in the 1990’s that they began bottling their own estate wines, they had already began producing their own olive oil.  The wine carries the Salento IGT designation, the largest and most common designation in Puglia, and IGT which is on the bottom most rung on the pecking order in Italy, but it allows the wineries the most leeway in production, as long as the grapes all come from the district, and I might add that some of the dearest and sought-after Italian wines only carry an IGT designation.  This wine has been described to me as having big tannins, dental enamel darkening  with offerings of dark fruits and berries with a deep full finish, that may require some time in the cellar to tame the tannins.  A wine like this is a natural with tomato-based dishes that Southern Italian cuisine is all about, from classic pizzas to bold and heavy pastas, or comfort food to me.