I was feeling quite good even with a sore gum after dental surgery, but it was like my first day out.  We had gone to a special wine tasting that I will get to, as well as some other wines that we encountered, which will all be in good time.  My Bride had to have some time for herself, not that she doesn’t mind doing wine tastings, actually I haven’t met anyone that doesn’t like a good wine tasting.  She wanted to see a movie and yes it was another chick flick, but that was alright as I liked the first.  The new Mama Mia movie was fun, but to me, not nearly as entertaining as the original, but I am not a movie critic. 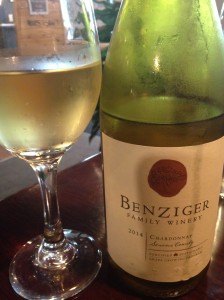 We also went out for dinner and I was looking forward to it, as I have been babying myself from before the surgery and I was still being careful, but it was going beyond soup.  We went to one of our new regular restaurants French Toast which is Cajun in its flavor.  My Bride went with one of their specials of the night which was pan-sautéed Mackerel with grits and asparagus.   I was still being careful and I went with shrimp and grits.  I can’t wait till I am ready for something chewier. 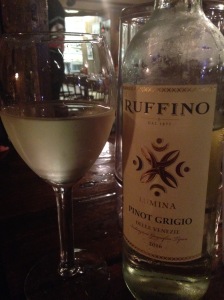 We continued the day with more wine as there is something commendable about this avocation of mine.  My Bride had a glass of Ruffino Lumina Pinot Grigio Delle Venezie IGT 2016. This light straw-colored wine was just the ticket as far as I was concerned to go with the seafood and the creaminess of the grits. This wine is only aged for ten days in Stainless Steel and is meant for quick and easy consumption and not for cellaring. The Delle Venezie IGT encompasses the three main areas noted for Pinot Grigio, namely Veneto, Friuli-Giulia and Trentino.  An easy choice and it paired well with her dinner.  As for me I went with a glass of Benziger Family Winery Chardonnay Sonoma County 2014.  This was just a soft buttery finished wine that was produced with whole cluster pressing with cold fermentation and then aged for nine months in Hungarian Oak barrels.  Benziger Family Winery purchased the old Wegener Ranch on Sonoma Mountain in Glen Ellen back in 1980.  The winery started transitioning towards being biodynamic in 1995 and were certified in 2000.  It was just the perfect way to end my day and my first day out.

A non-technical wine writer, who enjoys the moment with the wine, as much as the wine. Twitter.com/WineRaconteur Instagram/thewineraconteur Facebook/ The Wine Raconteur
View all posts by thewineraconteur →
This entry was posted in Dining, Wine and tagged Benziger Family Winery, California, Chardonnay, delle Venezie IGT, Italy, Lumina, Pinot Grigio, Ruffino, Sonoma County. Bookmark the permalink.