Posted on June 4, 2018 by thewineraconteur

Ms. Yoga is one of my revolving cast of characters that appear on these pages.  If I were to liken her to a cinematic character it may be Rosalind Russel as Auntie Mame, someone bigger than life and hardly a shrinking violet.  While I have known her for years, she and my Bride go back even further and they could be Thelma and Louise or perhaps Lucy and Ethel.  She used to live here in Michigan and she has moved a couple of times, because of that vile four-letter word – work, but we have maintained a steady correspondence and we have visited her at her other realms. 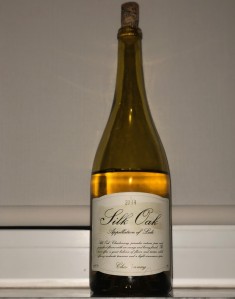 Sometimes I bring her up, because of the text messages that I receive from her.  I think originally, she was like my Bride and only drank white wines and then they were usually a Chardonnay.  That all changed especially when we all went to Napa Valley for a holiday and I had booked plenty of wine tastings, not to mention restaurant reservations.  When we get together, one never knows exactly what we will be drinking, though there will still be a Chardonnay somewhere in the mix.  She also likes to find me an occasional unique looking wine and label, from the early days when I was decoupaging the door to my first wine cellar that predates our current address.  In fact, it was her that introduced me to Marilyn Merlot, just because of the label and I have had a love affair with that wine ever since. 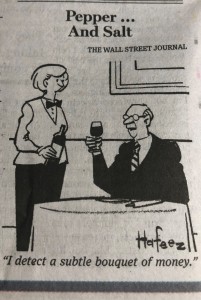 During the course of her latest texting announcements that she would be coming to Detroit, she sent me not only a wine cartoon, but a photo of a wine bottle that she really enjoyed and thought that I should know about it.  She was in Florida on business and wrote that she had found a Key Lime Vodka that she was enjoying in some Key Lime Martinis.   While she was in the Tampa area, she also discovered a wine from one of the assorted collections produced by Oak Ridge Winery of Lodi, California.  Oak Ridge Winery began as a cooperative in 1934 and is the oldest winery in Lodi.  It was bought by the Maggio and Reynolds families in 2001 and then joined by the Dondero family in 2010.  They have over 500 acres and the winery is known for its unique tasting room, which is in a converted 50,000-gallon Redwood tank.  The wine she texted me about was their Silk Oak Chardonnay 2014, and as I have told you, she is still very partial to that grape.

A non-technical wine writer, who enjoys the moment with the wine, as much as the wine. Twitter.com/WineRaconteur Instagram/thewineraconteur Facebook/ The Wine Raconteur
View all posts by thewineraconteur →
This entry was posted in Wine and tagged California, Chardonnay, Lodi, Oak Ridge Winery, Silk Oak. Bookmark the permalink.

4 Responses to Ms. Yoga is Returning