There is something about Rutherford in Napa Valley that brings out the awe factor for a six square mile area.  While the Rutherford AVA was established in 1981, it seems that for years, the Napa Valley AVA was an easier selling point to the masses.  I of course am old enough to always think of Clarence (Lumpy) and his father Fred Rutherford from the old “Leave it to Beaver” television show, but that is just how my brain functions.  I was at The Fine Wine Source trying tasting some wines.  One wine carries the Rutherford AVA and the other wine comes from a time-honored wine family based in Rutherford, but the wine carries the Napa Valley AVA. 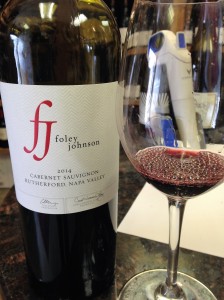 The first wine is from a newer winery that was established in 2012.  The Foley Johnson Rutherford Cabernet Sauvignon 2014.  The fruit for this wine came from their estate vineyard of forty acres and the adjacent Peral Vineyard.  The wine was aged for twenty months in French Oak, of which thirty-five percent was new and the balance of the barrels were one and two years old.  The wine was bottled unfiltered and they produced five-hundred-eighty-eight cases.  It was a delightful wine with a wonderfully long finish that I truly enjoy, but then I would have been disappointed with any Cabernet Sauvignon that was crafted from this area, that wasn’t.

The other wine that I tried was a Merlot and I think that Napa Valley has produced some wonderful wines from that grape as well.  The second wine came from the very famed Wagner Family of Wine group.  Emmolo Wines is managed and operated by Jenny Wagner, the daughter of Chuck and Cheryl Wagner and named after her Great-Grandfather who bought the property in 1923.  Emmolo Wines was started by Cheryl Emmolo Wagner in 1994 and now by the daughter.  When I visited Caymus, there were only five wines total for us to taste, the selection has grown quite a bit since then.  The Emmolo Napa Valley Merlot 2015 was an enjoyable Merlot and priced very reasonable for a quality wine from the region.  I would not hesitate ordering this wine with a meal, especially since I am very partial to a good Merlot.

A non-technical wine writer, who enjoys the moment with the wine, as much as the wine. Twitter.com/WineRaconteur Instagram/thewineraconteur Facebook/ The Wine Raconteur
View all posts by thewineraconteur →
This entry was posted in Wine and tagged Cabernet Sauvignon, California, Emmolo Wines, Foley Johnson, Merlot, Napa Valley, Rutherford, Wagner Family of Wine. Bookmark the permalink.

2 Responses to Two from Rutherford Wineries