Paulie May Have Moved Slow…

“It was like he had two families. The first time I was introduced to all of them at once, it was crazy. Paulie and his brothers had lots of sons and nephews. And almost all of them were named Peter or Paul. It was unbelievable. There must have been two dozen Peters and Pauls at the wedding. Plus, they were all married to girls named Marie. And they named all their daughters Marie. By the time I finished meeting everybody, I thought I was drunk.”  If you recognized that quote, you will understand how the flabbergasted I was during our dinner at Vincenzo’s in Louisville.  I watched a couple being led to a table, and the gentleman shook his head and pointed that he wanted to sit in the back of the restaurant and it was the table next to ours.  I nudged my Bride and indicated that the gentleman and his wife that were being seated at the next table was Paul Sorvino, to me Paul Cicero from Goodfellas and to her it was Phil Cerreta from Law & Order.  Now you have to understand that my children probably watched Goodfellas daily for years and the dialogue is etched perfectly in their and my memory for ever. 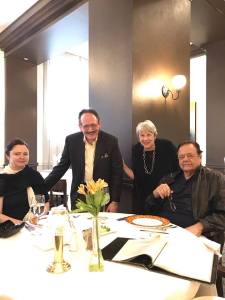 After they had given their orders, I nervously, walked over and had to tell Mr. Sorvino that my one grandson is named Paul, based on his character and he smiled.  He introduced me to his wife and we had a bit of small talk, and then I hesitantly asked if I my Bride could take a photo of me and him, and he graciously called the waiter and had the waiter take a group photo of the table.  I was star struck, I thanked him, my Bride went back to our table and I went outside to send only the photo to my kids.   My Favorite Daughter said “go ask him if they put too many onions in the sauce! LOL” My son who named his son Paul said “I’m a little jealous lol” and I responded “me too.”

My Bride was so impressed with his graciousness, that she called our waiter and requested that we pick up their drinks.  Our dinner party was still going on when the Sorvino’s called for their tab and he noticed that the drinks were missing from the bill, and the waiter told him, what we had done.  He looked over and waved and smiled, and I got up to thank him once again.  Of course, my Bride thought that I was monopolizing his time.  It just goes to show you, that you have to watch the room.  I was in Seventh Heaven and I have to admit that I am not jaded yet, at my age.

“I felt he used too many onions, but it was still a very good sauce.

Vinnie, don’t put too many onions in the sauce.

I didn’t put too much onions, uh, Paul. Three small onions. That’s all I did.

Three onions? How many cans of tomatoes you put in there?

2 Responses to Paulie May Have Moved Slow…