A Birthday at Vincenzo’s

While we were in Louisville, we went out to celebrate our nephew’s girlfriend’s birthday and she was turning twenty-one.  I know for most it is a big celebration, but back in the day, I was never carded, so my birthday when I reached the age of majority was not a big deal, and in fact I had lucked out, even more so, because they had moved the age to eighteen and then back to twenty-one when I hit that age.  The son chose the restaurant and he chose Vincenzo’s, one of the premier independent restaurants in the city, and near and dear to the family as he is a major benefactor to FEAT of Louisville; Families for Effective Autism Treatment, and in fact, right on the corner was the FEAT mascot.  The son also engineered a surprise for his girlfriend, as her parents came in for the dinner from Indianapolis, so she was really excited.

There was six of us already seated at the table when the couple came in, and we were all looking at the menu and were hiding our faces, for the surprise, and it was just fun. Our waiter got into the act and carded her and said that because she didn’t have the proper “adult” driver’s license, that she couldn’t be served and I think the table did a group heavy sigh, until we realized that he was having some fun with her.  Through the course of the evening, both Vincenzo and his brother Agostino, the head chef came out, to make sure everyone was enjoying the meal.  There was a lot of great dishes ordered.  My Bride ordered, and I could almost guarantee that she would order the Branzino.  It was a pistachio-encrusted Sea Bas topped with Vegetable Caponata and garnished with King Crab meat.  I had the Maiale All’a Rancio, which was a Berkshire Pork Tenderloin stuffed with walnuts, spinach, carrots, apples and Brandy with an Evan Williams Single Barrel reduction sauce.   For dessert there was a special birthday cake that was shared by all. 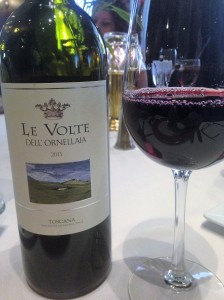 In keeping with the theme of the restaurant we started off with the third wine from Tenuta dell ‘Ornellaia.  The wine is made by the Frescobaldi family which has been producing wines for seven-hundred years.   We had a bottle of Le Volte dell ‘Ornellaia Toscana IGT 2015.  Ornellaia is one of the most famed of the “Super Tuscan” wines as they use vinifera that is not indicative of the area.  This wine was a blend of sixty-seven percent Merlot, twenty percent Cabernet Sauvignon and the balance was Sangiovese (the grape of Tuscany).  Each varietal was fermented separately in Stainless Steel, followed by malolactic fermentation again in Stainless Steel, then aged for ten months in Barrique and Cement tanks.  My Brother-in-Law wanted something a bit bigger for the second wine and he went with a Barolo.  The Azienda Agricola Gianfranco Alessandra Barolo DOCG 2012 was his selection.  Here was a relatively new-comer for Barolo as they are only in their second generation of producing wines.  A smaller estate, but Estate Grown and Bottled, this wine delivered the taste of the Nebbiolo grape the way I think it should be made, though we were drinking it quite young, as most Barolo wines need at least ten years to start mellowing out.  It was a great night of family, food and wine.