It was our last night in Louisville and outside of the commute, it was very pleasurable.  My Bride had finished up her Continuing Education credits which are necessary for one of her designations.  As for me I just sat in the lap of luxury and tried to catch up on some of computer work, I mean I work so hard.  I also had a chance to start packing some of the suitcases ahead of time.  All we had to do when we got up the next day was strip the bed linens and launder them, as well as the towels; and it was convenient as there was a washer and a dryer in the cabana suite. 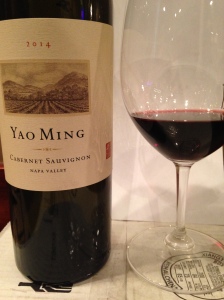 We were going to the main house and join them for dinner that evening.  My Sister-in-Law was preparing a dinner and I was fascinated watching her prep the dinner.  We were going to have salmon done in parchment and I just watched how easy she made the whole dinner appear, even to the point of adding some wine into the packets before cooking them.  She was also making a special salad and she had some great heirloom tomatoes that she had picked up that day, during her running around.  It was just a laid-back evening and it was good to take it easy. 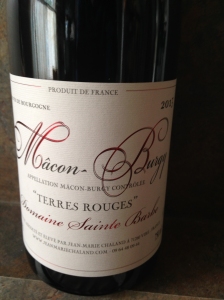 I opened up a couple more bottles that I had brought with us for the trip.  The first wine that I opened during the prep period was one wine that I thought I might have opened for Thanksgiving, but it was never opened.  The bottle of wine was from Domaine Saint Barbe and was “Terres Rouge” 2013, which just translates to “Red Lands.” This wine carries the Appellation Macon-Burgy Controlee and is a red wine from the Maconnais. To carry this Appellation Controlee the white wines must be Chardonnay and the red wines must either be Pinot Noir or Gamay. Domaine Saint Barbe has eighty acres of Gamay vines planted and they are a mix of Gamay, Gamay de Chaudenay, Gamay de Bouze and Gamay Freau.  It was a full-bodied wine from the region and I guess that I am not that knowledgeable or that my taste buds could discern all the nuances of the different Gamay grapes, but it went down very easily and by then it was time to open the second bottle to let it breath a bit.  I was really looking forward to them trying this wine as our hosts both enjoy big reds.  I had brought a bottle of the Yao Ming, and my Brother-in-Law enjoys basketball, mostly collegiate and he takes his one son to some of the games.  He knew that Mao Ling had retired, but he did not know that after he retired from sports in July 2011, he began a new career as a winemaker in November 2011, barely enough time to realize that he had retired. Yao Family Wines owns no vineyards in Napa Valley, but they do have a tasting room in St. Helena, with contracts with vineyards in Coombsville, Atlas Peak, Oak Knoll District and St. Helena, but the wines carry the Napa Valley AVA. The Yao Ming Cabernet Sauvignon 2014 was the perfect wine to end the evening with. The wine was almost entirely Cabernet Sauvignon, but there was 5% Merlot, 3% Cabernet Franc and 2% Petit Verdot, and of the Cabernet Sauvignon there were three different clones and each was vinified separately before the blending. Here was a wine that was aged for eighteen months in French Oak, of which 65% was new, and they had created a wonderful drinking wine even with a high 14.3 Proof, and I knew that this would be the last of the case that I would open up as I think it will require about ten years and then this wine would be wonderful and by then I am not sure how much of this vintage will still be around.  There were twenty-eight-thousand cases produced of this wine and I think that I heard that it was sold out at the winery.  I had chosen the proper wine for the last night and yes, all that was left was the bottle and the cork.