Posted on December 22, 2017 by thewineraconteur

We went to have a Christmas dinner with The Wine Raconteur Jr and his family. He chose his own nom de plume when he wrote his first guest article for me years back. I have known this young man since I had a hand in hiring him when he was a student at the university back in the day and I have been impressed with his knowledge and maturity ever since. I have watched him over the years grow and observed qualities that have made him a well-rounded individual with many interests, and some of them intertwine with my own interests. My Bride has also taken him as family from the first time she met him and we have had the honor to attend his wedding and to watch his family grow and prosper. 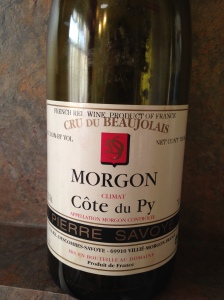 We had dinner over at their house, and I think it was partially so that his children could keep themselves entertained with their stuff. We started off with some appetizers of a home-made tomato based dip with crackers and some Fontina cheese. It turned out that the dip was made with Eggplant and it was the first time since I was a child that I have eaten Eggplant and the dip was excellent, so I may have to rethink my stance on Eggplant. The entrée for the evening was Lasagna, another dish that I do not like, as most restaurants have always slopped on the Ricotta and the Mozzarella and made an unpalatable dish for me. Once again, I was totally impressed with the dish as it was not what I was expecting and perhaps it was a Sicilian version that I had not encountered before, but my man, The Wine Raconteur Jr and his charming Bride did an excellent job changing my viewpoint on two dishes that I have not had for maybe forty years. Afterwards we had a tart of pecans and cranberries and he did remember that my Bride and I are delicate and require decaffeinated coffee. 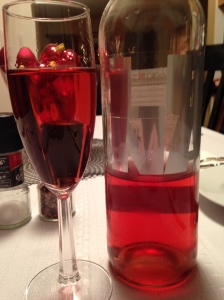 We brought the wine for dinner, even though I knew that he would have something special, but we could not let them cater the entire meal without some input from us. We started out with a bottle of Spanish Rosé from a new region for me, which was fine with the appetizers. The Bodegas Cesar Principe Clarete de Luna 2016 is a very pretty deep pink color in the bottle. I could not find much production notes for this wine, but I must presume that the skins were left after the pressing for a couple of days to get this deep color. The winery has been in production since 1982 in Cigales, which is just north of the Duero in Castilla y Leon and this wine had five thousand cases produced. The wine is eighty percent Tempranillo and then evenly split among Verdejo and Albillo. The wine had a good nose and a soft finish and I did not see any problems with it when paired with the tomato-based Eggplant dip. Our second wine, I might have changed, if I had known the entrée of choice, but it still worked out well, even though the dish was Sicilian and the wine was French. We had a bottle of Domaine Savoye Morgon Cote du Py 2005 which is from the Beaujolais region and is made from the Gamay grape. Morgon is one of the ten Cru du Beaujolais districts and Cote du Py is a Climat of Morgon. Cote du Py is considered the best in Morgon and is known for having excellent aging potential. The hill of Py is the highest point of Morgon and was once a volcano and hence the ground is basically basalt, which imparts a unique terroir to the wine. The wine had a nice color, good nose and a decent finish, and after pouring out half of the bottle among the glasses on the table, I realized that I should have decanted the bottle, but it was too late, after seeing the tell-tale sediment line from where the bottled had rested since it had been cellared, so we worked around it. There was enough richness in the wine that it worked quite well with the dish and it was not showing any signs of age. It was an excellent evening and we had a great time, and The Wine Raconteur Jr impressed me that he could make an old curmudgeon change his opinion not once, but twice that night.