Posted on December 14, 2017 by thewineraconteur

For some odd reason some people find me shy, while most would describe me as gregarious. The other night, I think the first would be a better fit. It was the first Friday night in December and tradition holds that my Bride was having her annual Lady’s Christmas Party. This little party has been going on since before we met, and even though she frets about all the minor little things, it always ends up being a nice party. They do all sorts of things like games, hopes and inspirations, group photos and a gift exchange. I am wise enough to realize that it is time for me to be a docile church mouse and hide in my office, until it is all over. Even though, I probably know everyone there, I just don’t fit in, and I can accept that feeling one night a year. 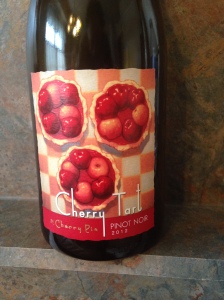 I hide in my office and kind of keep the door slightly closed, because we are not the best at filing and getting things put away, so that door is usually shut for any event at the house. I usually wait until I can hear that most of the guests have arrived, because that is my cue to go downstairs, say a group “hello” and fill up a couple of plates of food and go back into exile. The food part is my excursion into the unknown. All of the women bring a platter of food, a type of “pot-luck” affair, and even though I don’t like to generalize, women tend to like appetizers and finger-food, as opposed to stick on the ribs dishes. So, each year, I maneuver around salads and casseroles, foraging for enough to hold me, until the morning. I mean it would be in bad taste to order a delivered pizza. I normally can make a meal on a platter of shrimp cocktails, little meatballs, charcuterie and cheese, chicken wings and some of the best deviled eggs, year after year the winner, but it would be tacky to take the whole platter upstairs with me. 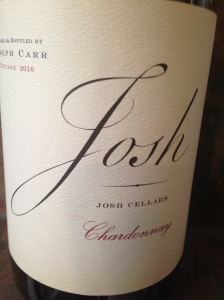 Man does live by bread alone, and I have to say that most women don’t either. The table that is set up in the library had multiple bottles of wine open, with adjacent wine glasses, and those little glass jewelry charms that one can put on the stem to identify the glass that you are using. When I am home, I tend to always use the same wine glass, and Lord knows that I am a creature of habit. I looked at the assortment of wines that were opened and there was a couple of popular sweet wines of Moscato and Riesling. There were also a couple that I recognize would be nice to write about, as they were not expensive, but different, and popular priced. The first wine that I tried was Josh Cellars Chardonnay 2016, a California Chardonnay from a winery that was founded in 2007 and a self-described negocient brand, as they have no vineyards. The fruit was harvested with a blend of Mendocino and Monterey county grapes. The winery was founded by Joseph Carr and named for his father who was a volunteer fireman, and the winery is dedicated to raising funds for assorted volunteer firefighter organizations. This wine is under the umbrella of the much larger Deutsch Family Wines and Spirits group. The wine was a good Chardonnay and very easy to drink, especially with the assortment of foods that I was nibbling on. The other wine that I tried and from the label art, was one that I had my doubts about, but I was game for trying. The Cherry Tart Pinot Noir 2012 was from Jason Woodbridge who also makes a single vineyard Pinot Noir called Cherry Pie Wines. He calls this wine a “multi-single vineyard blend.” The fruit came from single vineyards in Sonoma, Monterey and Santa Barbara counties and aged in French oak. While not stellar, it had a nice flavor from a very finicky grape and like I said, it was affordable and good for a crowd. I was able to hide most of the night, until I was summoned to take a group photo, and all the woman crowded around the dining room table and I took a couple of shots, to make sure that my Bride could find one that she approved of, since the very next morning she took all of the photos and had them developed so that she could make another page for her photo album devoted to her annual party.