Posted on November 22, 2017 by thewineraconteur

It is very interesting to see what type of wines are being offered at a wine tasting, especially when there is no theme or featured winery. This happened to be the situation when I last visited D. Vine Fine Wines in Livonia. In a normal slate of wines for a tasting, the wines featured go from white to reds, and from lighter to fuller; and I mention this, not for the seasoned wine drinker, but for those that do tastings infrequently or have just thought about trying it for the first time. 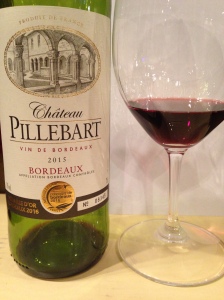 I was a little surprised to see that the third wine for the evening was from Bordeaux. Chateau Pillebart 2015, in hindsight would have been my logical choice for the first of the red wines. Chateau Pillebart is on the slopes of Castlemoron-Albert the smallest village in France and is located in the Entre-Deux-Mers which is the largest sub-region of Bordeaux. This wine is a blend of ninety-six percent Merlot, with three percent Cabernet Franc and Cabernet Sauvignon making up the balance. This wine was aged in Stainless Steel, instead of oak, so the fruit is forefront, but it still had a light taste, especially when compared to other Bordeaux wines.

The fourth wine of the evening and this one had more body was Echeverria Family Wines Propuesta Red Blend 2013. This wine is from the large Maipo Valley of Chile, and the winery originally was a producer of bulk wine, until they decided to step up their game; they were the first Chilean wine to be sold by Harrod’s of London. This wine is eighty-five percent Cabernet Sauvignon, ten percent Petit Verdot and the balance is Malbec. The wine was aged for eight months in oak and it had long legs and good color and nose, nothing outstanding, but worthy of a second glass.