Posted on November 2, 2017 by thewineraconteur

After going to the Detroit Institute of Arts we walked across the street to have dinner at Chartreuse restaurant in the legendary Park Shelton. This was a hotel back in the day, famed for having Diego Rivera and Frida Kahlo living there, when he was painting the masterpiece of a mural on the walls of the DIA glorifying the automobile and the assembly line. The hotel was opened in 1926 as the Wardell Hotel, named after Fred Wardell of the Eureka Vacuum Company. Later it became part of the Sheraton group, originally as the Wardell-Sheraton, then later as the Park-Sheraton. When it ceased to be part of the Sheraton group it became the Park Shelton and it went from a hotel to an apartment building and now condominiums. Some of the famous celebrities that frequented there were George Burns and Gracie Allen, and Bob Hope. We also had a chance to wander the main floor which besides have Chartreuse also had another restaurant and some independent ladies retail shops. One could still see the grandeur of the old hotel in some of the shops. 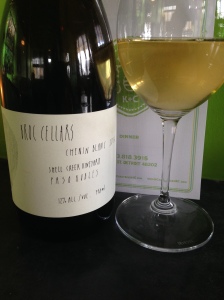 Chartreuse is a bistro on the corner of the hotel looking onto the DIA. When I originally tried to get a reservation, I was told that the earliest table I could get was for after eight that evening. The lady that answered the phone then suggested that they maintain open seating around the bar and that it was first come, first served, so we promptly got there before they opened at five. There were a couple of sofas in the bar area with low tables, that I did not think would be good for my back, so we took two seats at the long bar at the corner. My Bride at first was chagrined about the location, until she realized that she could watch the food preparation, as the kitchen was right off the bar. The menu was rather short, but well thought out and our waitress explained how the menu changes weekly if not daily, depending on what the chef has selected while out shopping. There were a few items that stayed the same, but all others were subject to change. Some of the dishes were cold and some hot, some for carnivores and some for vegans, so everyone could find something to eat. She even suggested that we try a new appetizer that was just out for the first time, which we did. We shared an order of Wagyu Beef Tartare with Avocado, Chili Mayonnaise, Scallions and house-made Tortilla chips with African and Mediterranean spices. It was delicious and a harbinger of what we could expect for the rest of our meal.

As I said the menu was short and well thought out, and so was the wine carte. Most of the wines were not what is normally encountered and certainly not the run of the mill selection found usually. My Bride still wanted something bubbly after we had the Prosecco during our lunch at the museum. She had a glass of the Stephanie Serol Rosé Turbullent NV sparkling wine made of Gamay from the Cote Roannaise AOD from the Loire Valley. A charming wine with a delightful flavor and made in the “Methode Ancestrale” way, which is probably the first method developed to make commercially effervescent and sparkling wines, and one of the more potentially difficult ways to do it. The wine is originally fermented in concrete and then bottled, with no additional dosage, just from the natural sugar. The bottles go through the usual time lapse and they go through a disgorgement, just to remove the deposit that naturally occurs in this process. I wanted to start out with a white wine, and the main thrust of the wine carte focused on California and they were donating some of the proceeds from the sales to aid after the fires in the wine country. I had the Broc Cellars Shell Creek Vineyard Chenin Blanc Paso Robles 2016. Chris Brockway has an urban winery in Berkley and one of the contracts he maintains is with Shell Creek Vineyard for their fruit. Shell Creek Vineyard was planted with vines in 1972, but the Stanton family has owned the land since the late 1800’s. The fruit is direct pressed, fermented and aged in a combination of a 500 Liter Stockinger (Austrian wood) and one-year old barrels for nine months with no filtration. The winery made a total of two-hundred cases of this wine, so that explains why I had never heard of it, or had the chance to try it before. I found it to be an excellent glass of wine to start the night off with.