Posted on October 27, 2017 by thewineraconteur

Anniversary (check), Sweetest Day (check), dining and dancing (check), old nerve from an emergency root canal from years ago decides to act up (not on the agenda). There is a predominately Michigan, but it has entered into a couple of other mid-west states as well, holiday known as Sweetest Day. I am sure that it was created by the confectionary industry and is celebrated on the third Saturday in the month of October. Actually, I know this, because twenty-two years ago on a Sweetest Day Saturday, my Bride and I had our nuptials and we gave small boxes of chocolate candies to all of our guests that evening. We were all set to celebrate our anniversary with two other couples and I was in agony. I had to go see my dentist and he had to drill through an old crown to alleviate the situation. With the aid of the Novocain and later some pain medication we kept our dinner date, though I was not in the best of moods. Also, the restaurant that I wanted to try did not take reservations, and holiday evenings usually bring out the poorest service. 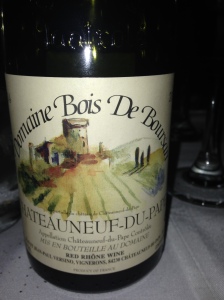 We arrived at the restaurant before 6:30, knowing how difficult a table for six could be, and we even tried to call ahead to see if they would hold a table, they wouldn’t, but they assured us that they had some available, and they did. I am glad that we got there when we did, because the restaurant was almost packed and it was an extremely large dining area and they had removed all the folding partitions that they probably used for private parties. We could see the stage and the dance floor from our table, so that was good. The restaurant is a fifty-year-old Steak House and is known for their food and for their live music, which is dance music from another era when couples held each other and actually had rhythm and bona-fide steps and not where they just kind of stand in one spot and kind of sway to the music. When the waitress was taking the orders for our table, when she got to the soup course I wanted the French Onion soup which came at a premium and then I was told that a cheese topping was also additional and when I commented that French Onion soup is traditionally topped with cheese, to which she just asked if I wanted to pay for the cheese or not; when I found out that it was Mozzarella instead of aged Gruyere, so I declined. My Bride ordered the Lemon Rice Chicken soup. We both had salads. My Bride ordered the Lump Crab Encrusted Whitefish topped with Panko bread crumbs and an extra order of asparagus. I had the Veal Oscar, thin medallions of veal topped with crab meat, asparagus and Béarnaise Sauce. The other couples had similar dishes and they were also surprised about the French Onion soup, so it wasn’t just me. I am glad that we did not order a dessert, they were huge.

The restaurant as I said was packed and I am sure that the wait staff was frazzled, but I did have to ask our server if we could get our bottle of wine sometime this year, my good spirits were a bit frazzled from the residual pain in my tooth. I was amazed at the rather poor wine training our server had, since there was a full page of wines in small print including the likes of Opus One. After the cork was removed from the bottle, the cork was just put into her apron, and when then she poured a taste for me in the glass, but as I reached over to take a taste, she was already pouring the wine into my Bride’s glass; thankfully the wine was fine. We had a bottle of Domaine Bois de Boursan Chateauneuf- du-Pape 2014. This is a relatively new winery for the Rhone as they were established in 1955. Chateauneuf-du-Pape is one of the few wine appellations that allow a mix of up to eighteen different grapes to be used, including white grapes for a red wine. The three main varietals for the region Grenache, Syrah and Mourvedre were blended with Counoise, Cinsault, Clairette, Roussanne and Bourbclenc (the last two being white). This wine is ferment initially on the lees for four to eight weeks in a mix of concrete and Stainless Steel and then the wine is aged for twenty-four months in old oak barrels. There is a ten-month additional aging period once the wine is bottled before it is released. My Bride and I did get a chance to do some dancing and I will go back there again on a non-holiday evening and give them another chance, and a toast to my Bride.

A non-technical wine writer, who enjoys the moment with the wine, as much as the wine. Twitter.com/WineRaconteur Instagram/thewineraconteur Facebook/ The Wine Raconteur
View all posts by thewineraconteur →
This entry was posted in Dining, Wine and tagged Bourbclenc, Chateauneuf-du-Pape, Cinsault, Clairette, Counoise, Domaine Bois de Boursan, France, Grenache, Mourvedre, Rhone Valley, Roussanne, Syrah. Bookmark the permalink.