A Night in Traverse City

Posted on October 5, 2017 by thewineraconteur

Every now and then I am the omniscient writer of these pages, as I get the information second hand, but I still try to show how wine adds or betters the moment. My Bride had to go to Traverse City where we had just been to in the last month or so for a day conference. It is a long drive, about four hours at least, but she was lucky and hitched a ride with a couple of others that were going to the conference, as I opted not to go for one night. If the conference had been for a couple of days, I think that I would have gone as then there would have been some free time and we could have done some additional winery visits.
The conference was at the historic and towering Park Hotel in the downtown area of Traverse City, actually when you are in the city, you can’t miss it, as it is the tallest structure there. She has stayed there often and enjoys the quaintness of this older style hotel and I unfortunately have never had the pleasure. This last trip for my Bride was not pleasure as the shower was not working and when she complained the staff was not able to correct the issue, needless to say, she was not a happy camper over the accommodations. 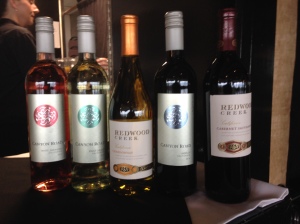 The evening dinner was a version of Surf and Turf and knowing my Bride, I am sure that she attempted to swap her filet for another piece of salmon. After the dinner, her and a couple of friends were going to play Euchre, which is a card game that is very popular in Michigan and in Ontario, but they could not find a fourth. The three of them decided to walk around the downtown area and quench their thirst away from hotel.

During the dinner portion of the evening there was an open bar for the conference attendees, but my Bride went for a white wine. She did send me a photo of the wines being offered and they are the usual suspects that one finds at group outings. There was Canyon Road White Zinfandel, Pinot Grigio and Merlot all of the 2016 vintage. I have written a couple of times about these popular priced wines. She tried one of the two wines from another winery and one that I had not had before at an event like this and she said the Chardonnay was decent. They were offering two wines from Redwood Creek, the Chardonnay and a Cabernet Sauvignon, and they were both of 2016 vintage as well. The label kind of reminded me of a cigar wrapper and all of these wines carried the California AVA and were bulk made and priced that way as well. She did not try the Cabernet Sauvignon, as she was happy with the Chardonnay. Redwood Creek was owned by the Frei Vineyards, but is now part of the Gallo Group with their own distinct name. I shall look for this label at the next time that I am at a function, though I was surprised that the hotel was not serving wines from the Traverse City area.

A non-technical wine writer, who enjoys the moment with the wine, as much as the wine. Twitter.com/WineRaconteur Instagram/thewineraconteur Facebook/ The Wine Raconteur
View all posts by thewineraconteur →
This entry was posted in Dining, Wine and tagged Cabernet Sauvignon, California, Canyon Road Winery, Chardonnay, Merlot, Pinot Grigio, Redwood Creek, White Zinfandel. Bookmark the permalink.