It is amazing the people that one meets through Social Media, even people that I should have known, but didn’t. I talk of my beloved Woodrow Wilson Junior High School in Detroit often and I have met old and new acquaintances from that site. One of them is a chef, who through the years has worked at some of the finest restaurants in the Detroit area. My first inclination of his culinary ability is when I wrote an article about an off the beaten path called The Rhinoceros which was one of the first “foodie” places before there were foodies, and I was contacted by one of my “friends” to let me know that he worked there. Over the years I have found out that he has worked at The Golden Mushroom, The London Chop House (the original), The Common Grill and Volare, all of which I have been to and wrote about with my memories of different wines. We were going to a resort for a board meeting in the northern part of the lower peninsula of Michigan, and I thought that I should truly meet this gentleman, so I made my Bride agree to make a detour to go have dinner at The Cold Creek Inn in Beulah, Michigan, because the first night of the board meeting would only be a cocktail party and appetizers. 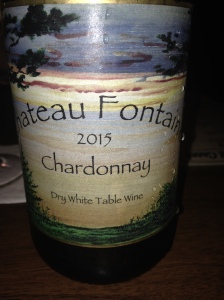 Beulah, Michigan is one of those charming towns found along Lake Michigan just on the outskirts of the wine country known as the Leelanau Peninsula AVA and the whole coast line of Lake Michigan has been discovered by Chicago as a very attractive and affordable playground for them. They have by osmosis one can say, created a desire for culinary delights all along the coast and Beulah is another town that has been discovered. While we were making our drive up, I called the restaurant to make sure that the chef would be working and he answered the phone call, and I think that he was just as amazed to see my name on the caller ID as I was that he had picked up the phone. We were off for a dinner and we were expecting a wonderful Michigan Whitefish dinner, but we were surprised by the evening’s specials. My Bride had the Seared Ono with Honey-Soy Glaze and Pineapple Salsa. The Ono was served on a bed of the salsa with a side of rice pilaf, and it was the first time that we had seen Ono offered since our trip to Maui. I went with the other special of the evening the Whisky Bacon New York Butt Steak. This was the end-cut of a New York Strip Steak pan fried with a Whisky Bacon Sauce, served with freshly prepared mashed potatoes and grilled asparagus. It may sound like I am prejudiced, but each dish came out prepared perfectly.

We started off with a local wine from the Leelanau Peninsula AVA from Chateau Fontaine Wines. The Chateau Fontaine Chardonnay 2015 was a pleasant wine that was a blend of juice that was aged for eight months in Stainless Steel and oak for a very crisp and subtle Chardonnay. The winery was started in the Seventies on a deserted potato farm as well as a former cattle pasture and is thirty acres in size and they grow several different varietals for their estate wines. The white was followed up with a red wine, namely Trapiche Oak Cask Malbec 2015 from Mendoza, Argentina.  In doing some additional research, it appears that the Oak Cask is a designation for a Reserve wine, but I can not totally verify it.  Trapiche began life in 1883 as El Trapiche and they are now one of the largest wine producers in Argentina. Mendoza is one of the leading areas in Argentina and Malbec is the leading grape for the area. One word of note, if you are traveling to this part of Michigan, what looks like a short drive from one destination to another is not, and it took about two hours to get to our final destination. The dinner was well worth the delay and we have already discussed potentially going there again in the near future is possible.

A non-technical wine writer, who enjoys the moment with the wine, as much as the wine. Twitter.com/WineRaconteur Instagram/thewineraconteur Facebook/ The Wine Raconteur
View all posts by thewineraconteur →
This entry was posted in Dining, Wine and tagged Argentina, Chardonnay, Chateau Fontaine Wines, Leelanau Peninsula, Malbec, Mendoza, Michigan, Trapiche. Bookmark the permalink.