Alas, I Wish I Had More

Posted on December 27, 2016 by thewineraconteur

Most of the time that we have a dinner party here at the house, it is usually white or red wines and sometimes something sparkling. Our Christmas get together with the two Raconteurs ended up with a great surprise. Just before the company arrived, I had gone to the cellar to grab the red wine for the dinner, as I had pulled the sparkling wine in the morning to get chilled. While I was down selecting the red wine for dinner, I decided to select a dessert wine. We seldom have dessert wines, unless it is with people that really like wines, because we don’t like to have left over wines. I grabbed two different bottles, one older and one much younger, just in case I needed a back-up and then I put them both in the refrigerator to cool them down a bit more from the cellar. 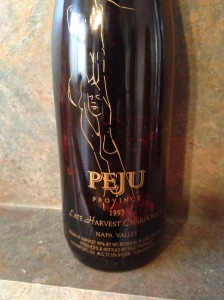 We had a couple of different desserts to put out, and no, my Bride did not bake or make them. She found a huge Tiramisu cake and then a box of “Angel Wings.” Angel Wings are what we have always called them, there might be a fancier name for them, but I always connotate them with the Christmas Season. They are simply eggs. Butter, cream and a little flour made into a dough, put through a pasta press cut into strips and dropped into a pot of hot oil, then dried and while still warm they are very generously covered with powdered sugar. I have always found them in Italian, Hungarian and Polish bakeries; so, I am sure that they have many different names, but for Americans they are “Angel Wings.” They are probably not the healthiest item to eat, but it is the holidays. The Tiramisu cake was the largest multi-layered version that I had ever seen and it was equally rich. 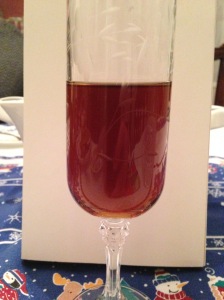 Now getting to the most important part of the dessert setting was the wine. I had grabbed as my first choice a bottle of Peju Province Late Harvest Chardonnay 1997 and I remember liking it at the winery when we were there, but it just kind of sat in the cellar undisturbed since that trip. I thought it was worth a try, since the wine was made with Chardonnay grapes that had the Noble Rot of Botrytis and most of these types of wines have long lives. Two other factors that made me willing to gamble was that the bottle was dark brown glass, and instead of a foil cartridge cap, the bottle was sealed in a wax or plastic covering, similar to what one finds in a new bottle of Makers Mark Bourbon, so I figured that it was airtight. Every wine that we have had from Peju Province has been excellent, so I had my fingers crossed. After breaking the wax seal, the cork completely crumbled as I tried to remove it, which meant that I had to decant the wine. As I was decanting the wine the aroma was wonderful, but the wine was very dark, I even took a photo of a glass of it, to show you the color, it was not quite as dark as a Stout or a medium brewed coffee. While the color might have been a bit startling, the taste was awesome. It was such a mellow wine with just enough sweetness to make everyone stop and marvel. It was so perfect that I really kind of ignored the desserts on my plate and enjoyed the Nectar of the Gods, all the while lamenting to myself that I did not have another bottle of this to share again.

A non-technical wine writer, who enjoys the moment with the wine, as much as the wine. Twitter.com/WineRaconteur Instagram/thewineraconteur Facebook/ The Wine Raconteur
View all posts by thewineraconteur →
This entry was posted in Dining, Wine and tagged Botrytis, California, Chardonnay, Napa Valley, Peju Province. Bookmark the permalink.