Posted on December 25, 2016 by thewineraconteur

We recently had a Christmas dinner for The Wine Raconteur and The Wine Raconteur Jr. The Wine Raconteur Jr. actually selected his nom de plume when he guest wrote an article for me, and I guess he chose that name to honor me. We have been friends for about twenty years, as I was looking for a part time employee and I posted the request at the local university. We always try to get together for the Christmas season as well as the two Brides and their two children. He has a job that requires a lot of traveling, so it is harder to coordinate the time to get together. 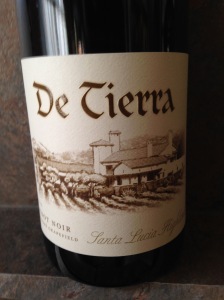 Well they came over and we immediately put out some appetizers and wine for them, and during that time, we also exchanged presents; it is always great to watch children open up gifts, especially if they like the gift and get excited. The appetizers were quite simple and just a way to get everyone relaxed and enjoy some wine in the living room, as it was just a couple of cheeses, crackers and shrimp cocktail. After we moved into the dining room, we started dinner. Of course, my Bride started with her famous Caesar Salad, and yes, I do brag about it, whenever I get the chance and she had bought a baguette loaf, because she received a fancy cutting board, but she didn’t want to use it, she doesn’t want it to get scarred – go figure. For our entrée, she made her newest and her latest popular dish, which is Salmon in a Bourbon Sauce, as well as Armenian Pilaf, spinach and green peas. She was guessing that the children might prefer green peas over spinach, but I think the dinner was accepted to a degree by the children, I know that the adults enjoyed it. 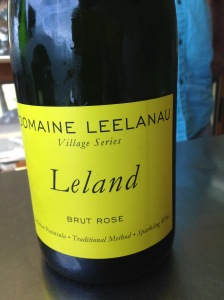 We started off during the appetizer portion of the meal with some festive wine for the season, and because my Bride just enjoys using her stemless crystal flutes, whereas I am more traditional and prefer a stem for my flute, and I actually have a set of the old saucer-style champagne glass, but they have been relegated now for dessert servings. I chilled a bottle of Domaine Leelanau Village Series “Leland” Brut Rosé NV from L. Mawby Vineyards from Michigan. Mawby has made quite a name for himself in Michigan wines, and has also helped other up and coming wineries as well, as I have been told by other winemakers. He is very serious about his sparkling wines and he makes some wines by the Charmat Method, but most of the wines he produces is by the Traditional Method, though he cannot legally call his wine Champagne. The “Leland” wine was a special run that Mawby produced for a group, and I had a chance to buy some of the over-run. The wine is a blend of Chardonnay, Pinot Noir and Vignoles from 2012 and then just a small dosage of Pinot Noir from 2014 that was added for color, and hence the Non-Vintage status, and the wine was just perfect. Actually, I find it much more agreeable compared to the Non-Vintage sparkling wines from some of the famed big houses of both California and France and they are priced about the same. It was so good that everyone had seconds at least. For the salmon, I selected one of my Bride’s favorite choices with that dish, a wine that I had recently received from my wine club, and though I knew that it could have aged for probably another ten years, I was eager to try it. The wine was De Tierra Tondre Grapefield Pinot Noir Santa Lucia Highlands 2012 and it was a pure Pinot Noir to enjoy and it continues to prove to me that the Santa Lucia Highlands has and will continue to grow this fussy varietal successfully. I have had other wines from this winery and I have been pleased. The Tondre Grapefield began in 1997 with just six and a half acres and is now eighty acres in size and they grow an assortment of Pinot Noir clones. At De Tierra, they aged this wine for twelve months in new and neutral French Oak and they produced one-hundred-twenty-five cases of wine. Everybody was happy about the dinner and the wines, except perhaps for the children who didn’t get to experience the wine.

2 Responses to Two Raconteurs for Christmas