Posted on November 25, 2016 by thewineraconteur

While I was attending my cousin’s son’s wedding, I received a message from my wayward friend The Caller. I never know when he is going to send me text messages, but it usually is interesting, non-the less. He and his wife were at someone’s home and they were going to have dinner and watch the University of Michigan play Iowa in a football game.

I am sure that they were enjoying cocktails and munchies while the dinner was being prepared. They were having a pot roast with root vegetables and a deep green salad was all that he relayed to me, and I realize that, that particular dish requires some cooking time, so they might have gotten a bit potted that afternoon and prompted the call. I know that he reads these articles, so he knows that I have to rib him a little bit, as he taunts me with his photographs of what he was enjoying that day.

The first wine that he sent me was from a Kirkland Signature Medoc 2013, which is a blend of 70% Cabernet Sauvignon and 30% Merlot with his admonishment that I should not discount Costco. The Medoc in France is quite lofty and in the pecking order of Clarets, it is above basic Bordeaux and Bordeaux Superior appellation, but below the Haute Medoc and the individual communes. Costco is now the largest wine merchant in the United States, though because of certain state laws they cannot sell everywhere. They have gotten so big into wines that their Kirkland Signature is readily seen with a variety of different grapes and regions and I am sure that they are a bonus to the vineyards in several countries these days. While they are not premier wines, they are doing their best at several levels to keep people happy and at affordable prices, as I have mentioned several of the wines over the years. The second wine and I am sure it is what they had with dinner was The Inaugural R. Collection by Raymond Cabernet Sauvignon 2014 of the Raymond Vineyard & Cellar. This winery is now part of the Jean-Charles Boisset group of wineries. While Raymond Vineyard & Cellar have many estate wines, this wine carries the appellation of California, so the grapes can be harvested from across the state and is more affordable. The final label that he sent me and it is not surprising since he seems to have acquired a true taste for after dinner wines was Dow’s Vintage Porto 2000, which should have been cellared for at least another ten years, but I am sure that he wanted to taste it. Vintage Ports are not declared every year, and even the different Port houses cannot agree all the time when to declare a vintage. Dow’s in the last century only declared twenty-eight years to be a vintage year. The Douro region of Portugal where Porto (Port) is made, has some rather unique rulings of what constitutes the wine as there are eighty varietals that can be used and through the years, some of the vines have grown with some of the others, so there can be no exact listing, perhaps the winemaker only knows for sure. The most popular varietals for Port are Touriga Nacional, Touriga Franca, Tinta Barroca, Tinta Roriz and Tinto Cao; and then these are a couple more that are prevalent such as Sousao, Tinta Amarela and Mourisco Tinto. A Vintage Port is aged for a couple of years and then it is bottled, and it is one of the longest-lived wines to be found and after years of aging it requires the fine art of decanting as there is plenty of sediment that amasses in the bottle. I would venture to say that The Caller and the others enjoyed a fine meal and some good wines, in spite of a very close game, that alas Michigan lost with a score of 14-13. 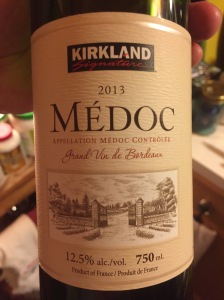