Posted on August 21, 2016 by thewineraconteur

While I was at Elie Wine Company shopping with my Brother-in-Law we also discovered a couple more Spanish wines. Elie has branched out some, from originally only carrying French wines, as he has become a distributor and wholesaler for some Spanish wines that he feels has merits, at the expense of just buying the Spanish wines that are routinely found here in the States. He uses the same keen sense that has kept him going in French wines and applying the same traits elsewhere. I will discuss two wines that he was offering from the Catalonia region of Spain. 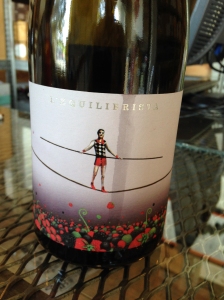 The first bottle is Ca N’Estruc L’Equilibristra Negre 2013. This wine is made by Francisco Marti and is a charming blend of Carignan, Grenache and Syrah and from the label one would presume that it is a fine act of balancing the three varietals for maximum effect. The wine is originally fermented in open wood and stainless steel, and then is aged in French Oak for fourteen months, and it was truly a lush wine to me. 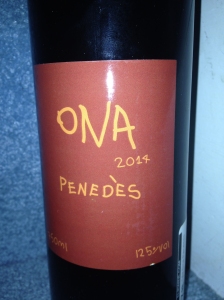 The other wine that I bought that was not offered for a tasting, but I bought strictly on the authority of Elie. I have bought other wines with the “Ona” label, as he is quite proud of the fact that his daughter designed the label. The Ona Penedes 2014 is entirely of the Marselan varietal, and it is a new one to me. This is a grape for the Century Club scorekeepers as it was created in 1961 of a cross between Grenache and Cabernet Sauvignon. This grape is being grown in the South of France, and it has done quite well in the Penedes region of Spain, which is the main wine growing region of Catalonia, and found between Barcelona and Tarragona. There were four-hundred-fifteen cases made of this wine, and I am sure that it will not be in my cellar long, as I am very curious to try it.

A non-technical wine writer, who enjoys the moment with the wine, as much as the wine. Twitter.com/WineRaconteur Instagram/thewineraconteur Facebook/ The Wine Raconteur
View all posts by thewineraconteur →
This entry was posted in Wine and tagged Ca N'Estruc, Carignan, Grenache, L'Equilibristra Negre, Marselan, Ona, Penedes, Syrah. Bookmark the permalink.