Posted on August 19, 2016 by thewineraconteur

My Brother-in-Law came down after the trip to Mackinac Island with his family, and we had another party to attend. I had suggested that he come shopping with me to Elie Wine Company. After we dropped off everyone early for the preparations for the party, we jumped in the car and took a little trip. The wines that my Brother-in-Law has acquired over the years, makes me look like a rank amateur, but then again, I probably am. I had told him several times about the selection of wines, and such a specialized offering that I knew that he was intrigued. When we arrived, Elie was there and I made the introductions and then we kind of wandered around, before we did some tastings. I do think that my Brother-in-Law was just as amazed as I was, the first time entering the shop. First Growths of the Medoc and of Burgundy were as prevalent, as one would find big name bulk producers at other stores. Then there was the Champagnes and the cases and cases of wines stacked just so. Magnums and Jeroboams of First Growth Medoc wines were just as casually arranged, to cause heart flutters among wine lovers. Then we tasted some wines that were being featured. 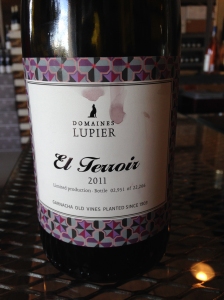 I have to admit, that I wanted especially to go there that day, as I had received an email advertisement from Elie about some Spanish wines, and lo and behold there was a wine grower that I had the good fortune to meet through Social Media. I even had to show Elie that fact off of my phone. Domaines Lupier El Terroir 2011 of Navarre was from the husband and wife team and the fruit was harvested from twenty-seven different plots with vines from sixty-eight to one hundred years old. All those vines of Garnacha, in Spanish, that we more comfortably know as Grenache, dating back to 1903, and there were 1,688 cases produced. This wine bowled me over from the nose and the first taste and I knew that I had to get some of it. Thank you Elisa Ucar and Enrique Basarte for your fine labors of love, and I am so looking forward to opening this wine after some proper cellaring.

The other wine that we tried was from Bodegas Maldivinas La Movida Granito 2012, Vino de la Tierra de Castilla y Leon and also Garnacha, so we tasted similar wines. This wine was harvested from four and a half acres of ninety year old vines. This wine was fermented in cement with native yeasts with some whole clusters to highlight the fruit and then aged in neutral oaks barrels. It was very powerful and with a definite fruit forward taste.