Posted on August 17, 2016 by thewineraconteur

I know that most people when they see that word would immediately think of the 1990 film GoodFellas. I am also sure that was the thought behind the naming of an Italian restaurant that is right downtown in the Lake View Hotel on Mackinac Island. The restaurant on their website alludes to the “mob theme” of the eatery. I have never eaten there, but this is the second time that I have stopped at Goodfellow’s Wine Cellar, which is adjacent to the restaurant. 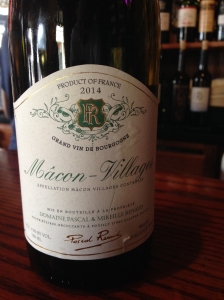 Goodfellow’s Wine Cellar is the storage facility (I guess) for the restaurant, but they are also a Wine Bar and a wine retailer. One can also eat in the Cellar at lunch or dinner and they offer flights and pairings for the dishes served. There was wooden wine crates placed strategically around both for show and for utilitarian reasons and the shop was filled with wines. This is a serious wine shop with plenty of choices to make one’s wallet much thinner, but also to make some great wine memories. We had walked down from the resort, just to see what they were pouring, as the wine at our resort, unless one was buying by the bottle was not that unique. It was another hot and muggy day on the island, so we were looking at the chilled wines. 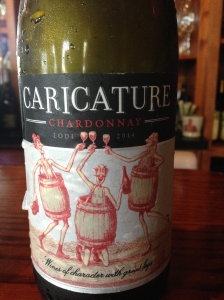 The first wine that we had was Caricature Chardonnay 2014 from Lodi, in the Central Valley of California. It is made by Lange Twins Family Winery and Vineyards and they are Certified Lodi for Sustainable Winegrowing, which is becoming more prevalent especially in California. My Bride liked this wine more compared to the other Chardonnay wine that I had. I had a glass of Domaine Pascal & Mireille Renaud Macon-Villages 2014. The appellation Macon-Villages is for the white wines of the Maconnais located around Macon. This particular Domaine has twenty-five acres scattered through the villages of Pouilly, Solutre and Davaye and this wine is made in Stainless Steel for a crisp Chardonnay. The appellation Macon-Villages is a step above the basic Macon appellation. While I liked this wine better, I would have been happy with either one and I thought they both were much more interesting than just a California Chardonnay. The wine selection was that impressive that perhaps we will have to make dinner reservations one night at Goodfellow’s.

A non-technical wine writer, who enjoys the moment with the wine, as much as the wine. Twitter.com/WineRaconteur Instagram/thewineraconteur Facebook/ The Wine Raconteur
View all posts by thewineraconteur →
This entry was posted in Wine and tagged California, Caricature, Chardonnay, Domaine Pascal & Mireille Renaud, France, Lodi, Macon-Vi, Maconnaise. Bookmark the permalink.