Posted on January 18, 2016 by thewineraconteur

It was just a typical winter day in Michigan. I had shoveled the driveway and sidewalk of the snow that had fallen the night before, I had my morning coffee and had read the newspaper; and yes I still enjoy the pleasure of having a newspaper in my hands to read. I then went up to my office to check on Social Media, before I would actually start my day. I am a creature of habit, I guess. Then I spotted something, a posting, which I had to double check for its accuracy, as one has to do, all the time on Social Media. Alan Rickman, that charming actor from England had passed away. My first thoughts were of the suave villain Hans Gruber from the original Die Hard film and how elegant he was. Then I thought of my Bride, who in her world he was and always will be Professor Severus Snape from the Harry Potter stories and films. And then I went downstairs and decided to watch anew one of the many DVD films that we have amassed. I gave myself a couple hours of peace to watch Bottle Shock again. I think that it is the most enjoyable film that I have ever watched about wine, and I do enjoy being entertained, when I have the chance.

While this film is considered a “small film” for Hollywood, and we originally saw it at an art theater in the Metropolitan Detroit area, that I enjoyed it so much, that when the film was released in the DVD format, I had to own a copy of it. Most wine appreciators know the film as a dramatization of the Judgment of Paris in 1976, when in a blind tasting the wines of California beat the French wines and started a wine revolution that is still going strong. I have to admit that I enjoy “feel good” movies and wish to be entertained, and not end up being depressed from watching a film. I consider this film to be the Rocky of wine movies, even though I know that others will contend that another film about California wines is better. Films like wines are subjective, and can always be counted on for some lively conversations with the right crowd. 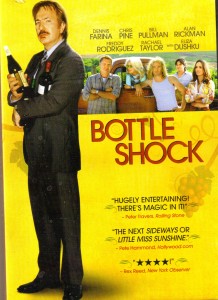 The funny thing is that I was learning about wines, at the tail end of the Sixties, and remember when the actual story came out in 1976 and people were sure that it was a fluke. Even on our week long trip to Napa Valley, we did not stop at Chateau Montelena, and it wasn’t until 2012 that I ever even had the chance to enjoy a bottle of the wine. The most amazing part of that fact was that we were in the Upper Peninsula of Michigan in the city of Marquette, and we were there the week after Memorial Day and with the hopes of not encountering snow, like we have been having here this week. For those of you that do not know the city of Marquette, it is a college town and we found this wonderful little restaurant, and the bottle of Chateau Montelena was the finest bottle on their carte, and it was a fine bottle and added immensely to the dinner that evening. Since that time, my Bride has been to Marquette and goes back to that restaurant, not for the Chateau Montelena, but for the food; you see without me, the expenses she incurs in the Upper Peninsula are far more affordable. By the way the response to the line in the film that I used for the title of this memory, and one of the best lines to me in Cinematic History is “What were you expecting…Thunderbird?”

A non-technical wine writer, who enjoys the moment with the wine, as much as the wine. Twitter.com/WineRaconteur Instagram/thewineraconteur Facebook/ The Wine Raconteur
View all posts by thewineraconteur →
This entry was posted in Uncategorized and tagged California, Chateau Montelena, Napa Valley. Bookmark the permalink.