How to Upset a Surprise Party

Posted on January 20, 2016 by thewineraconteur

This has to be the dreaded thought for all that plan for surprise parties. The arabesque intricacies that are necessary to make it all work out for the best. Allow me to state emphatically that it was not me, before this goes any further. There are many other ways I could have titled this article, but they could have all sounded vulgar. Suffice it to say that a very good friend was celebrating her Sixtieth Birthday, while some people would shy away from such an announcement, she wanted to party. There was a wonderful party being planned by her family and friends at a restaurant, and we were looking forward to attending, well actually I was looking forward to attending it, as my dear Bride, several months earlier had made plans to go visit one of her friends that lives in Phoenix, and she was going to get away from the cold for a long weekend. Our dear friend decided that she would host her own party for the occasion and sent out emails to everyone. My Bride saw her a day or so later at a professional luncheon and our friend lamented that her family and friends were giving her hell for doing that, and they had to tell her what they had planned. My Bride listened to all the lamentations and then smiled and confirmed what she had unknowingly had done. The surprise party had been cancelled. 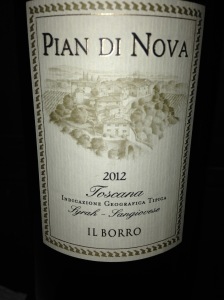 The alternative party went off without a snag, and I must say that our friend did throw herself a grand party. The party was at Blackfinn, An American Bistro in Royal Oak, Michigan. When I was setting this information into my phone’s calendar, I was surprised to find out that this restaurant is a chain, even though we had been there numerous times, I was not aware of this fact. Our friend catered her own party there with chafing dishes filled with sliders, beef and chicken, flatbread pizzas and quesadillas. There was also a large sheet cake, because a birthday party would not be a party without a cake. The guest of honor surrounded the party area with a couple of huge arrays of balloons and she looked wonderful with her tiara and a sash proclaiming her age. She was enjoying the evening on the eve of her birthday and it was a testament to her popularity that there was such a large turnout, and it was a shame that my Bride was not there for the festivities. 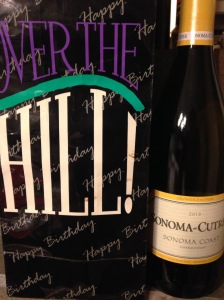 I had taken as a gift, a bottle of her favorite Chardonnay; in fact she hardly ever drinks anything else but Chardonnay wines. My Bride had found a gift bag for the wine, with the standard “Over the Hill” sentiments, but it was all in jest, because the Birthday girl will never be “over the hill.” Her favorite wine, when she can get it is Sonoma-Cutrer Chardonnay and this was a 2012 vintage of this wine from the Sonoma Coast in Northern California. This maritime section of Sonoma is predominately known for their Pinot Noir and Chardonnay wines, which account for almost seventy-five percent of all production. I might also add that Sonoma-Cutrer has been producing very dependable wines since 1973. I was enjoying an interesting red wine for the evening, Il Boro Pian di Nova Toscana Rossa IGT 2012. Another wine that has taken the IGT designation for a wine that is not the norm, for Tuscany and most wine cartes tend to list these wines under the umbrella of “Super Tuscan” wines. This wine was seventy-five percent Syrah and the balance Sangiovese, the workhorse grape of the region. What a delightful wine with a lot of body and just enough tannins, and perfectly drinkable at the moment. This wine was aged in assorted barrels for six months, then another month in Stainless Steel, and then another six months in bottles before being released. I would have it again, in a heart beat. I also have to admit that I maintained my all-in-jest snarkiness, by telling the guest of honor that she didn’t look a day older than sixty-one.

A non-technical wine writer, who enjoys the moment with the wine, as much as the wine. Twitter.com/WineRaconteur Instagram/thewineraconteur Facebook/ The Wine Raconteur
View all posts by thewineraconteur →
This entry was posted in Dining, Wine and tagged California, Chardonnay, Il Boro Pian di Nova, Italy, Sangiovese, Sonoma Coast, Sonoma-Cutrer, Syrah, Toscana IGT. Bookmark the permalink.