Posted on January 12, 2016 by thewineraconteur

One of the great things about having dinner at a restaurant that is also a wine bar is the selection of wines. There was so much to try and to discover and it was wonderful to see all the activity in downtown Detroit. As I reflect upon it, my Bride and I may have been the oldest diners there, and that makes me smile to know that Detroit is on the up-swing after the years of being denigrated. After enjoying our appetizer, the General Manager came over to our table and I introduced him to my Bride, and then he gave me a tour of the restaurant. We started out at the wine tasting table and he was showing me some of the wines that were theirs exclusively in the state. He pointed out the cases of Maya and Colgin, which were just piled up, waiting to be cellared properly. He was explaining how the ceiling was reclaimed from a church that had been torn down, and other points of interest throughout the restaurant where reclaimed building materials had been utilized. We ended up at the far end of the restaurant where the bar was, and that was another center of lively patrons, so I know that they were definitely onto something in a big way. 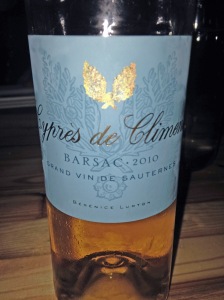 The next course was what had sold my Bride on going to the restaurant in the first place. We had Foie Gras done with Grilled Pineapple, Sauternes and Brioche Pain Perdue; the latter to explain it quickly was like a wonderful couple of slices of French toast. The Foie Gras not only sounded good, it was expertly prepared and I might add that my Bride is quite the authority on that dish, so the Gods were happy. I asked our waiter if they had any Sauternes by the glass, and I was hoping that it was not Chateau d’Yquem; not that I don’t love that wine, but I really did not want to skew the price of dinner to badly (sometimes one has to be fiscally responsible, even if my Bride thinks that I am not). From the dessert menu I chose for us a couple of glasses of Cypres de Climens Barsac 2010. Barsac is one of the smaller communes that are all over shadowed by Sauternes and even though they have their own appellation the rules for the two are almost identical. The wine we had was the “second” wine from the First Growth Chateau Climens of Barsac and the wine is made from Semillon and Sauvignon Blanc. Most of the wines of Barsac are aged in oak from eighteen to thirty-six months and for the most part I enjoy the wines from Barsac equally as well as from Sauternes, with the exception of Chateau d’Yquem which is in a class all of its own. 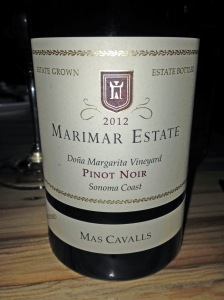 For my Bride’s entrée she had chosen the Scallops which was offered with Corn Coulis, Bacon Lardon, Bacon Powder, Pea Tendrils and a Fig Gastrique and they tasted as good as they sounded and looked. For my entrée, I chose a duck dinner and I even stretched a bit for me as it was a Honey Lavender Thai Chili Duck “Confit” that was served with Herbed Couscous, Haricot Vert and Crispy Skin. I have to say, it was the spiciest version of duck that I have ever had and I enjoyed the unique flavors of the dish. So far it is the closest that I have come to trying some Thai food or cuisine. My Bride went back to her first wine of the evening to go with her scallops and that was the Alois Lageder Dolomiti Pinot Grigio 2014. Since I was having duck, I am so dependable; I went with a Pinot Noir. I had a glass of Marimar Estate Mas Cavalls Dona Margarita Vineyard Pinot Noir 2012 from the Sonoma Coast. This was a new winery for me, and I do not mind trying a new wine. The wine is from a twenty acre vineyard, aged for eight months in French Oak and was unfiltered; it was a very dependable Pinot Noir wine for me, but the next time that I ever have that dish, I think that I shall look for something more robust and adventurous, because the Thai Chili was too much for a classic Pinot Noir. Even as I was writing that last sentence, it almost felt sacrilege to me, but that is the wonder of wine that there are no true and steadfast rules for pairing wine with food. In case you are curious, there was still some room left and my next article will discuss the desserts we shared.